Originally released in May 1998, CRADLE OF FILTH's heavy metal classic "Cruelty And The Beast" is regarded as one of the milestones in the gothic black metal genre.

Now 21 years later, this lustfully dark masterpiece has been wickedly remixed and remastered by Grindstone Studio's Scott Atkins and will be reissued on November 1 through legendary U.K. label Music For Nations.

Singer Dani Filth comments: "Released on the 5th of May, around the same time as we were arrested at the Vatican, 'Cruelty And The Beast' had been a painstaking labour of love, a year of intense writing amid ever growing popularity and distraction. The album's concept of the Hungarian blood countess Elizabeth Bathory — both historically astute and fictionally correct — was to become a dangerous obsession of mine and one that saw many a first light of dawn working on the lyrics, hellbent on making the story worthy of her legend."

Released on CD, transparent red vinyl and digitally, this elevated version of "Cruelty And The Beast" features new artwork from band illuminator Stuart Williamson, exclusive liner notes from Dani Filth and black metal writer and documentarian Dayal Patterson as well as a bonus track cover of IRON MAIDEN's "Hallowed Be Thy Name".

Dayal says: "'Cruelty And The Beast' has long been considered a milestone album in CRADLE OF FILTH's career, a combination of atmospheric storytelling and visceral, and surprisingly vicious, songs. This 21st-anniversary edition has bolstered those songs with an added weight, improving the sound considerably with a warmer and punchier mix, making it a must hear for long-time fans and newcomers alike."

75 limited-edition test pressing vinyl versions will also be available, each coming with a personalised signed letter from the prince of darkness himself.

With Dani Filth fully committed to the collaboration and endorsement of both the new audio and artwork, the band will be working on promo and there will be a celebratory exclusive live show at London Palladium on October 19 where they will be performing the album in its entirety.

Dani concludes: "'Cruelty And The Beast' remains a phenomenally important album in the band's back catalogue and one that I am exceptionally proud of, as I am exceptionally proud of this re-mistressed version, 21 years on from the original release. I hope the listener — sitting there by the flame-lit hearth with his/her walnut pipe on the go — thoroughly enjoys this CRADLE classic, so vividly brought back to life for the fickle world today."

Pre-order now at this location. 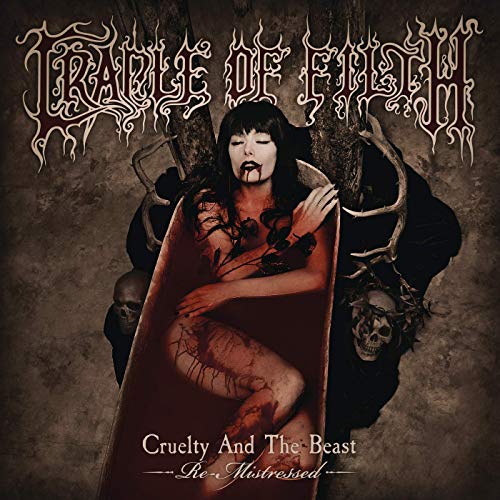