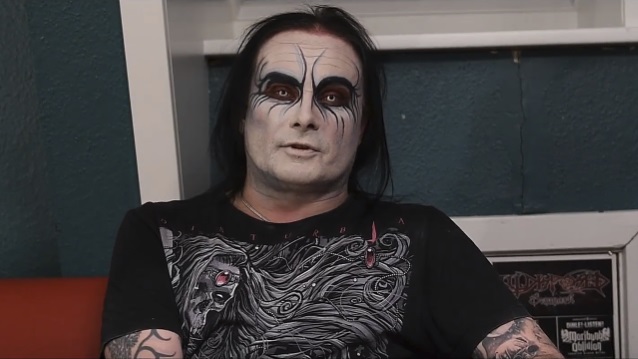 Prior to CRADLE OF FILTH's performance in Odense, Denmark on March 3, frontman Dani Filth was interviewed by HeavyMetal.dk. The full conversation can be viewed below. A few excerpts follow (as transcribed by BLABBERMOUTH.NET):

On the band's plans to commemorate the 20th anniversary of the group's third album, "Cruelty And The Beast":

Dani: "This year, we're re-releasing the album, but it's been remixed and remastered from the original tapes. There's a little bit of keyboards to add in because strangely enough, some of the keyboards were played straight into the mastering, so we didn't have records of those on tape. Other than that, it's all done. I think it's going to come out in the fall — the album plus the cover of IRON MAIDEN's 'Hallowed By Thy Name'. It sounds fantastic. It's a real tightrope to walk between retaining the atmosphere and improving the quality and the production."

On which CRADLE OF FILTH album he's most proud of:

Dani: "All of them. It's like choosing between children, isn't it? It's probably 'Cruelty And The Beast', just because it was a groundbreaking album for us. It was our first dip into the waters of doing a story, so it's quite monumental. They were real madcap times back then — a lot of fun."

Dani: "I don't think it's becoming any more [acceptable] — maybe some strains of it, like the blackgaze thing, and some of the more symphonic elements of it are becoming more the norm, but that's because they're crossing over into more normal territories. There was a peak at some point where it was being reported on in national newspapers and what-have-you, and curried favor with the press because it was unusual. The whole premise behind CRADLE was to get as successful as possible — not, you know, by selling out or anything like that, but we were quite comfortable with [exposure]. It threw up a lot of really interesting opportunities — films, TV, appearing in weird things like game shows. I'm not averse to a little publicity, as long as it's not courted in a really fickle way where it's all set up. I prefer things to be organic and natural."

On the band's remaining goals:

Dani: "We've covered most of the bases we set out to do. I think it would be nice to know that we progressed and reached more people and carried on the course that we're on."

On the most unusual gift he's received from a fan:

Dani: "I guess one of the most unusual ones would be someone gave me their prosthetic leg to sign in Australia. Later on during the show, it came sailing through the air and landed on the stage, so we just took it back with us."

On whether he's working on any outside projects:

Dani: "Fernando [Ribeiro] from MOONSPELL has talked me into going back and looking at my poetry book that I wrote years ago, and then didn't have the heart to put it out for some reason. There was always something else going on. I just forgot about it. I'm going to re-look at that, revamp that and see if we can get that released."

"Cruelty And The Beast" — CRADLE OF FILTH's final album with future DIMMU BORGIR drummer Nicholas Barker — was originally released by Music For Nations in May of 1998. A concept album based on the legend of Elizabeth Bathory, the record cracked the Top 50 in the United Kingdom, Germany, Holland, France, Austria and Finland.

This weekend, CRADLE OF FILTH will wrap up an extensive European tour in support of their twelfth album, "Cryptoriana - The Seductiveness Of Decay", released last September via Nuclear Blast. The group will then travel to North America for a headlining tour, during which they will be supported by the Ukrainian metal band JINJER.