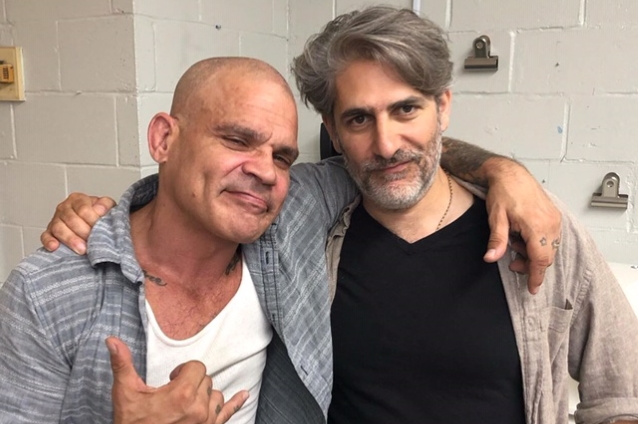 "Between Wars" takes an intimate look at the struggle of re-entering civilian life post combat. It follows veteran marine Franny Malloy (Shaun Paul Costello) as he struggles with integrating himself back into civilian life following the war in Afghanistan. Battling PTSD and self-destructive behaviors, he finds his only hope in marine-turned-PTSD-psychologist Sarge, played by Michael Imperioli. Flanagan plays McManus, old school Bronx Irish gangster and general mad man.

"Putting an emphasis on societal issues and human conditions at the forefront of our daily lives, 'Between Wars' leaves us looking at ourselves with a deeper lens," Phillips says. The film also takes a unique approach in camera technique, led by Emmy Award-winning director of photography Alastair Christopher, giving the audience the feeling that they are walking in the characters' shoes, and blurs the line between real life and the fictional lives on screen.

"This one is all heart and a fuck-of-a-lot of soul," said actor Imperioli.

Raised in Europe and on New York's gritty Lower East Side among the legends of punk and new wave, Harley began his own musical career at age 11, performing at legendary hangouts like Max's Kansas City and CBGBs as the drummer for the classic New York City punk band THE STIMULATORS.

By the early '80s, Harley founded the seminal hardcore band CRO-MAGS, writing the majority of their music and channeling his powerful survival instinct into the blistering soundtrack and storyline for the '80s and '90s. In March 2019, Harley was featured in "Punk", a four-part docuseries on Epix from executive producer John Varvatos and punk music legend Iggy Pop. He's also played himself and other punk characters in films and TV.

Despite his authenticity and intensity, at his core, there is a softer side of Harley. He's a strong and visible advocate for mental health and an inspiring voice for PTSD. He is a loving father, devoted husband, outstanding friend and is in the process of creating a foundation that supports animal charities and underprivileged kids.

No mention of Flanagan would be complete without referencing his passion for martial arts. He is a second-degree blackbelt under Master Renzo Gracie and has been a BJJ practitioner since Renzo first arrived in New York in the mid-1990s. He has been teaching — and now directing — the kids' program at Renzo's flagship academy in New York City for the last 10 years.

"Between Wars" is Flanagan's first feature film score. He's also completing the CRO-MAGS first album in nearly 20 years, which will be released this year. He says: "I feel stronger, happier mentally, spiritually and physically then I have in years, and I am looking forward to the future."