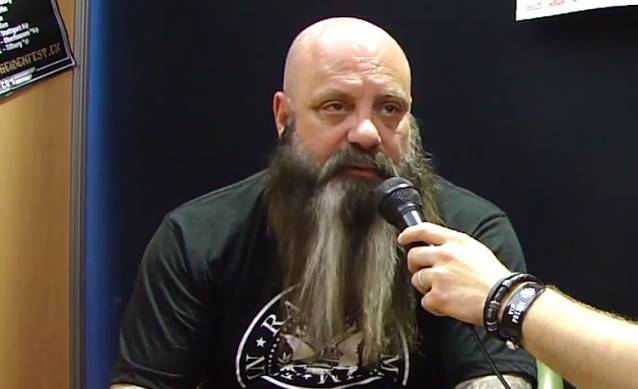 During a recent interview with Portugal's Riff-Mag.com, CROWBAR frontman and former DOWN guitarist Kirk Windstein was asked if he thinks the much-rumored PANTERA reunion — featuring Zakk Wylde (BLACK LABEL SOCIETY, OZZY OSBOURNE) filling in for the late "Dimebag" Darrell Abbott — will ever come to fruition.

"I know [former PANTERA and current DOWN singer] Phil [Anselmo] was doing a PANTERA song or two with BLACK LABEL [SOCIETY during DOWN's recent tour with BLS], but I can't ever see it being billed as PANTERA," he said. "If it's Philip Anselmo, and fellow surviving PANTERA members] Rex Brown, Vinnie Paul and special guest Zakk Wylde doing the music of PANTERA, or celebrating the legacy of PANTERA — something like that — I can see that happening. But to say 'This is PANTERA,' no."

He continued: "To me, it would be a good idea even to have like a… I'm sure financially it woudn't be the best thing… But to have a thing where Phil does those 'Metal Masters' [clinics] with Kerry King [SLAYER] and whatnot, it would be great to have Zakk play a few things… If they could mend things — not him and Rex, but with Vinnie — if you could have Phil, Vinnie and Rex together and have Zakk play a bit and have a couple of other guys who were good friends with Dime play as well and just celebrate what they accomplished, I think that would be cool."

He added: "In my opinion, from knowing Philip for so many years, I don't really see them calling themselves PANTERA. But [to have them] play the songs, why not? We all love it. It's one of my favorite bands ever. I mean, it's the best metal band of my generation, basically, or the newer generation."

Dimebag's longtime girlfriend Rita Haney in 2011 called on ex-PANTERA drummer Vinnie Paul Abbott and Philip Anselmo to settle their differences in honor of Dimebag, who was shot and killed by a crazed gunman while performing with DAMAGEPLAN at a Columbus, Ohio rock club in December 2004.