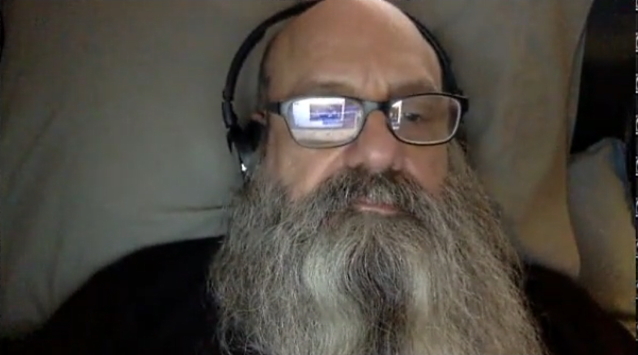 CROWBAR's KIRK WINDSTEIN Admits He Was 'Not A Big Fan' Of COVID-19 Vaccines, But Is 'Proud' To Be Fully Vaccinated

Frontman Kirk Windstein of New Orleans sludge metal veterans CROWBAR spoke to Aftershocks about how his band's upcoming North American tour with SEPULTURA and SACRED REICH might be affected by the ongoing coronavirus pandemic. He said (as transcribed by BLABBERMOUTH.NET): "It seems… They're starting to talk — and they're not just talking about Louisiana or the New Orleans area; they're talking about the whole U.S. — where they think it's about to hit a plateau. It's spreading so fast, it's so fucking contagious that… It's one of two things — either we literally shut down the entire country or people get their fucking vaccines, whether they like it or not.

"I was not a big fan of it — I'll admit — but I am fully vaccinated and I am fully proud of it," he continued. "And I caught COVID — and so did my drummer — on tour with MUNICIPAL WASTE. It's not those guys' fault, but we did catch it. And it wasn't a picnic, I'll tell you that; it was no fun. But that's done.

"It's one of them things — wear your mask, do your social distancing, keep your fucking hands clean. If you don't feel good, stay home."

According to Windstein, he has "no choice" but to get vaccinated against COVID-19 if he wants to play in other parts of the world. "If I worked at the corner grocery [store] or something and that was my job and I never wanted to travel or go anywhere, who knows?" he said. "But guess what? I love to travel. And I love to travel around the world; I love to play. You tell me to get fucking two shots, I'll get two shots. You tell me to get three, I'll get three. Whatever it takes. That's just the reality. Whatever it takes to protect myself and others around me, I'm gonna do what I can do."

CROWBAR's North American tour with SEPULTURA and SACRED REICH will kick off on March 4 in Sacramento and will make stops in Toronto, Cleveland, and New York before concluding on April 8 in Berkeley, California.

CROWBAR will release its new album, "Zero And Below", on March 4 via MNRK Heavy (formerly eOne Music). The LP's first single, "Chemical Godz", was made available in December.

"Zero And Below" was produced, mixed, and mastered by Duane Simoneaux at OCD Recording And Production in Metairie, Louisiana and was previously described in a press release as "reverently old school, counterbalanced by a resonant melodicism that's stunningly mature."

So I got my second covid shot Friday. It started hitting me Saturday night and yesterday was miserable, but I'm feeling...