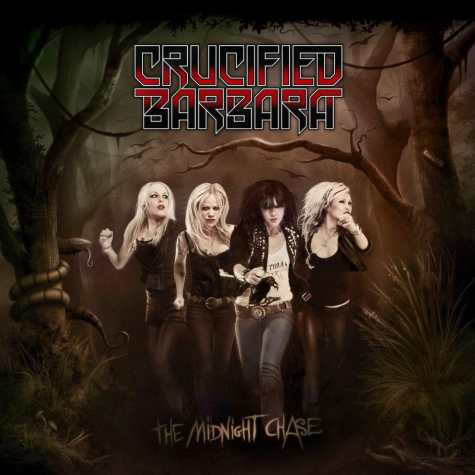 Fan-filmed video footage of the Swedish all-girl hard rock quartet CRUCIFIED BARBARA performing on October 13 at Ebullition Bulle, Switzerland can be seen below.

CRUCIFIED BARBARA's third studio album, "The Midnight Chase", was released on May 23 in Japan and May 28 in Europe. A North American release followed on July 31 via Nuclear Blast. The CD was recorded at Music-A-Matic Vintage Recording Studio in Gothenberg, Sweden with sound engineer Henryk Lipp and producer Chips Kiesby.

Formed in Stockholm in 1998 by bassist Ida Evileye (now-wife of MESHUGGAH drummer Tomas Haake) and guitarist Klara Force, CRUCIFIED BARBARA plays a fiery brand of rock 'n' roll tinged with metal and lashings of punk, pop, thrash, and whatever else dares to cross their path. Ida Evileye dominates her trusty Sandberg bass, Klara Force rocks steady on her '76 Gibson Explorer, Mia Coldheart belts out her unapologetic vocals while riffing all over her Gibson Gothic Flying V, and Nicki Wicked pounds on her hot pink sparkle Yamaha Maple drum kit until you're splayed across the floor with a bull's-eye knock-out punch that'll make you spit your teeth out. Now you know what happens when MOTÖRHEAD mates with THE RUNAWAYS.

No strangers to hard work or success, CRUCIFIED BARBARA's debut single from their 2005 debut, "In Distortion We Trust", climbed to #8 on the Swedish pop chart. They played Australia, toured across Europe opening for MOTÖRHEAD, SEPULTURA, IN FLAMES, and DORO, and earned a prestigious slot alongside BLACK SABBATH, VELVET REVOLVER, and SYSTEM OF A DOWN at the U.K.'s Download festival. With all that touring, it would be four years before the band got around to recording their second album, 2009's "'Til Death Do Us Party". Next thing you know, there they were on national television performing at the 2010 edition of Melodifestivalen, the Swedish national final for the Eurovision Song Contest.