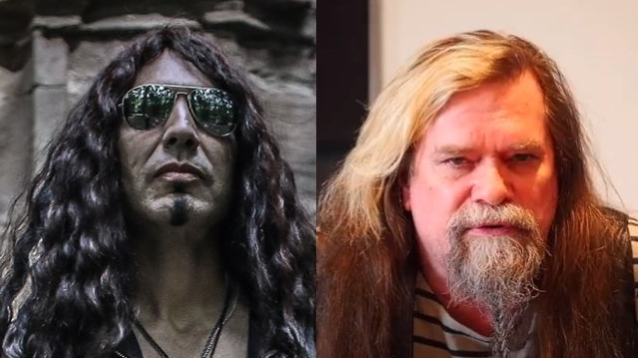 Current and former W.A.S.P. guitarists Douglas Blair and Chris Holmes will appear for the first time on the same record.

Blair and Holmes have both contributed lead guitar on individual tracks, along with a host of additional well-known guests, to the new album from BEHEMOTH frontman Adam "Nergal" Darski's ME AND THAT MAN project, titled "New Songs, New Man, Same Shit Vol. II".

Adam said: "One of the main concepts of ME AND THAT MAN albums is to combine genres from all over the place, and make sure we make some ass-kicking rock and roll songs! Now imagine you match old school W.A.S.P. with new-school W.A.S.P. on ONE album! That's unheard of — and yet the outcome is sick AF!!!"

Blair added: "It's an absolute honor to add some juice to this record! I love the track I played on, and can't wait to hear the others, especially Holmes's: I'm sure it totally slams with his signature ballsy tone! I never thought we'd end up playing on the same project someday, so this has got me pumped! On top of that, I really got into the first ME AND THAT MAN disc, and have been looking forward to Volume II... Adam's an animal on so many fronts, and his energy is infectious!"

Founded in 2013, ME AND THAT MAN's latest album, "New Man, New Songs, Same Shit, Vol. 1", was released in March 2020 via Napalm Records. The effort was described in a press release as a "bewitching collection featuring ominous lyricism atop unfiltered blues, gothic-laced folk, outlaw country and Americana-influenced anthems."

Blair has just released "Generica", the first video and single by his "power duo" SIGNAL2NOISE. The SIGNAL2NOISE debut nine-song offering, tentatively titled "Fighting Mental Illness", is nearing completion and will be released by Platform West LLC.

Holmes has spent the last few months promoting the documentary film "Mean Man: The Story Of Chris Holmes", written and directed by French filmmakers Antoine De Montremy and Laurent Hart. The project, which was made available on Blu-ray, DVD and VOD in January, was born in 2014 after De Montremy and Hart had an opportunity to meet and direct Holmes in a music video for the Holmes-penned song "Let It Roar" in Cannes. At that time, the now-62-year-old rocker had more or less disappeared from the music scene, leaving his home in the U.S. to seek a new beginning with his wife Sarah in France.