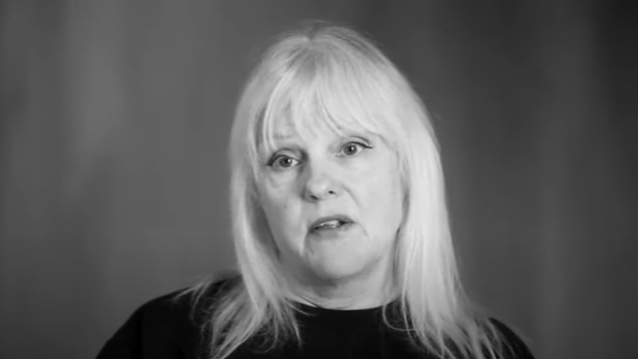 Cynthia Albritton, a.k.a. Cynthia Plaster Caster, the legendary artist and "recovering groupie" renowned for the plaster casts she took of many top musicians' erect penises and other body parts, died after a long illness on Thursday, April 21. She was 74 years old.

A decade ago, Cynthia told Rock Scene magazine about getting the rock and roll groupie bug when she met THE ROLLING STONES in the 1960s: "This exciting life was the life for me. I was a shy, fledgling, virginal, goofy girl that wanted to get laid by cute British boys with long hair and tight pants. But I wasn’t experienced or seductive and the only way I could go about getting the zippers down was in a goofy, funny way. I discovered that way when I was an art major in college when my art teacher told me to make a plaster cast as my homework assignment of something that could retain its shape. 'Something solid,' he said, 'as in hard.' I'd heard through the grapevine that penises got solid although I had yet to see that happen."

Jimi Hendrix was Cynthia's most infamous cast and one of her first, done in February 1968. Cynthia recalled: "Jimi Hendrix was coming to town. He was my first real rock star that dipped his dick and it was unbelievable. We were the groupies that got to the hotel first and we were the only groupies in Jimi Hendrix's room. It wasn't our very first cast. I had tried it on a few civilians first to be ready for Jimi. He's my biggest. No, he's not my biggest. There are 'bigger-ish' others. But I couldn't say whether or not he's my most exciting. Because they're my sweet babies and I am their mama and I'm very democratic with all my babies. I don't like to play favorites. I love them all. The experiences were equally exciting and weird and different from each other."

According to Variety, Cynthia's "collection" also included Wayne Kramer of MC5, Pete Shelley of THE BUZZCOCKS, Jello Biafra of the DEAD KENNEDYS as well as female breasts from the likes of Laetitia Sadier of STEREOLAB, Sally Timms of the MEKONS, PEACHES, Karen O of the YEAH YEAH YEAHS and many others. She later expanded her subjects to include filmmakers and other artists and eventually amassed a collection of 50 plaster phalluses.

Albritton was immortalized in the KISS song "Plaster Caster", and a 2001 documentary of the same name chronicled her artistic legacy.