Hailing from Texas, DAGON was formed in 2003 and has released the "Architects of the Black Crown" demo in 2005, and a full-length album, "They Who Abideth Amidst the Poison", in 2006, both out on Desastrious Rex. A second full-length album, "In Desolationem Per Nefandum", is now available through Fire of Fire, a division of The Ajna Offensive.

According to a press release, "In Desolationem Per Nefandum" "encapsulates the plagued state of the Fifth, the soon-to-be-fetid birth of the Sixth, and the radiance of the Shining Seven in totality. This album is not about self empowerment, rather, it is an awakening to the nature of conscious manipulation and was created with iniquitous intent within the vibratory patterns of the current.

"DAGON is an expression of the hermetic beliefs and practices of the members; it is not orthodox devil worship. DAGON's live performance is acclaimed for its ability to align within THE current. Those who have seen it know this truth."

Shows have been played throughout the USA and in Mexico with DEMONCY, NIGHTBRINGER, LEGIONS OF ASTAROTH, ARCHGOAT, CRIMSON MOON, and many other bands. This year will see DAGON return to the Gathering of Shadows for the third time.

Check out a sample from the album at this location. 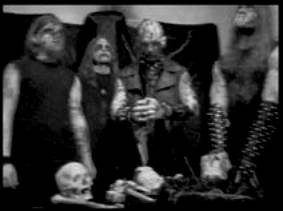