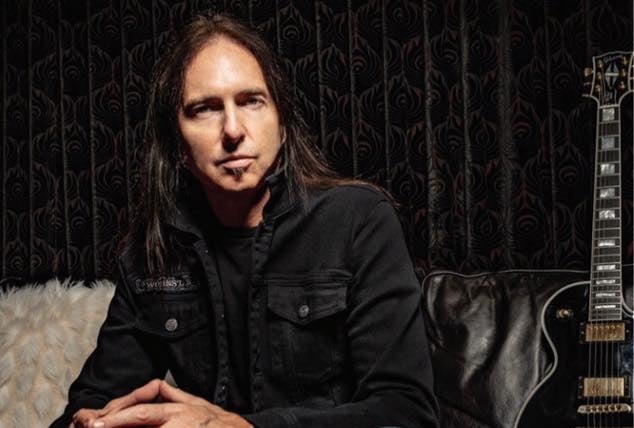 Singer/guitarist Damon Johnson (BROTHER CANE, ALICE COOPER, BLACK STAR RIDERS) recently appeared on "The Classic Metal Show" to discuss his forthcoming solo album, "Memoirs Of An Uprising". The full conversation can be streamed below. A few excerpts follow (as transcribed by BLABBERMOUTH.NET).

On his career path to date, and choosing to go solo:

Damon: "I believe the record will show that I've been so committed to the concept of a band. I've loved bands my whole life; bands are what got me into rock 'n' roll. I've always been so swept up in that gang mentality – us against the world, four or five guys in a room writing songs, in a studio recording songs, traveling, touring, performing. I think last year, maybe that was really what my common-sense brain was saying — 'Look, Damon. You're just not meant to do it in a band. You just need to be Damon Johnson, and take this resume and be grateful for it, and be grateful for the people that know who you are. Take all these things that you've learned, channel them into your own music and your own name, go out there and build that and be grateful.' That's where I'm at, and that's where you're finding me today. [I'm] really energized about it, and just excited to see what the future brings. So far, it's been nothing but positives with this decision that I've made. I'm really inspired right now."

Damon: "It was very difficult, because I love those guys so much. I've not been so integrated and fulfilled by being in a band to that degree really as I have since BROTHER CANE, and the proof of that is that we spent six years together and made three albums together. That's a long time, and that's a lot of music. Obviously, we accomplished a great deal, and we were able to move the needle at a time where it's hard for rock bands to gain recognition. We were able to do that over in the U.K. and in other parts of Europe. That band and that experience is very responsible for, I guess, me rediscovering my songwriting jones and getting those chops back into shape. But we were spending so much time out of the country. We were spending so much time building something in a place that I don't live, my family doesn't live, and that cost just become more than I wanted to bear anymore. I've never made a decision to move on from a band based on that, and that was really difficult, because the band is on the rise, and we are growing and gaining more fans. Not at a fast clip, but it's definitely growing. I just felt like it wasn't sustainable for me to stay there, especially sitting on this whole back catalog of stuff that I've been doing for the last couple of decades. I certainly talked to my family about it and my trusted inner circle, and took a deep breath and went 'Okay, I'm going to pull the trigger. I'm going to step out. I'm going to do Damon Johnson from here on out.' So far, so good."

On "Memoirs Of An Uprising":

Damon: "There's nothing you could say to me to make me feel more gratitude, or to feel more validated, than to talk about the lyrics and the songs themselves. For all of my list of accomplishments on my resume, I could easily understand why people would think, 'Okay, Damon Johnson's making a solo record. There's going to be a lot of guitar, a lot of solos.' That's not what this is. It's never what I wanted it to be. I've always loved songs. I've always loved songs that speak to the listener. My favorite artists, my favorite songwriters, I always felt like they were writing not for the world, but they were writing about me. I would find something in that lyric [that] you relate to — 'Wow, I've been through some things, and I feel what Tom Petty's talking about right here. I feel what Joni Mitchell's talking about right here. I feel what Freddie Mercury's talking about right here.' I feel like this is that moment for me, and quite frankly, I really feel like that's the way forward for me from this point on. I don't think people are necessarily interested in you singing about some journal about your life, but the fun thing about writing songs is, maybe you start the idea of the lyric based on something you went through, and then in the second verse, you can bring in a second character that had nothing to do with what you experienced, but it makes the song more interesting, more impactful. That's what 'Memoirs' is... It is a record that I feel like a rock music fan can enjoy listening to from front-to-back in one sitting if they would give it that chance."

On the line between commerce and creativity:

Damon: "That was another difficult part of the decision to step out of BLACK STAR RIDERS. I had just invested six years, and we were growing it, and everybody was able to come home with a little bit of money and feed their families and pay their bills. That doesn't just come out of thin air — that took work and investment and time. You can imagine a little bit of — there's no other word — anxiety, of 'Okay, I'm just going to leave this and I'm going to maybe not start on the bottom rung of the ladder, but it's no higher up than the second rung. We've got to figure out a way to pay the bills and keep the lights on.' I just looked at the fact that I've been a professional musician for over 30 years now, and I just felt like that stuff always kind of takes care of itself. It sort of works itself out. I know that sounds maybe a little too cosmic or a little too, 'What are you talking about? Money doesn't work itself out. You have to go find it and make it and earn it and bring it home.' I think once I got over the hump of the costs related to making the album and getting a couple of people on board as a team to help me promote it, I was able to exhale a little and go, 'Okay, I'm starting to see how [this can work]. If we can get through this first quarter of 2019, it's going to be all right.' That's how I feel about it... I'm not thinking at all financially. I have no expectations at all, other than [that] I do expect this album to be the vehicle that leads to all kinds of opportunities — performance opportunities, streaming opportunities. I made a great product — the vinyl looks amazing; the CD packaging looks amazing — [and] we're getting ready to order second pressings of everything. The thing really isn't out officially [yet]. I did a PledgeMusic campaign, and a lot of those fans ordered it in advance, but just a handful of [live] dates we've done so far, the stuff is flying off the merch table. That's a good feeling. It definitely helps my family exhale a little bit and go, 'Okay, maybe we are going to be all right.' [Laughs]"

"Memoirs Of An Uprising" will be officially released on March 8 via Double Dragon Records. The album is a 10-track collection that is both fierce and diverse — a powerful springboard for the musician to start his next chapter. Collaborating with his longtime friend and songwriter Jim "Johnny Blade" Troglen, Johnson began assembling a group of songs in divergent tempos and grooves that appealed to his musical side and then laced them with lyrical themes of betrayal and revenge.

The official music video for the album's first single, "Shivering Shivering", can be seen below. 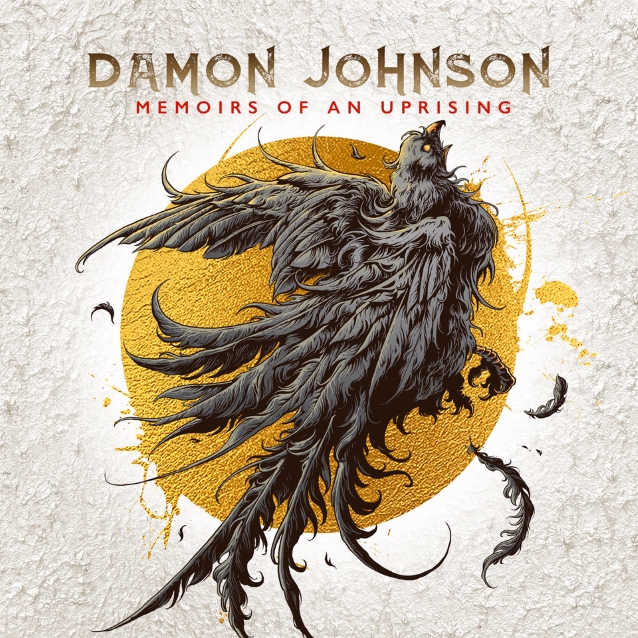