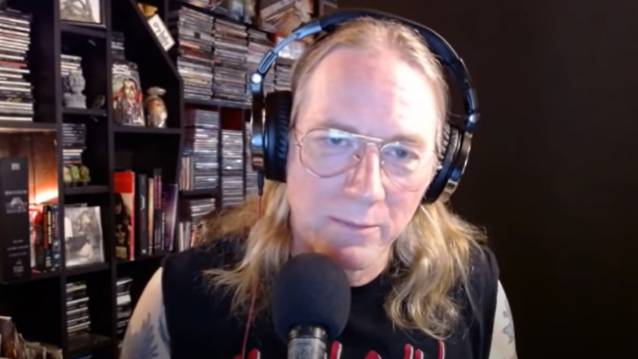 In a new interview with Waste Some Time with Jason Green, DANGEROUS TOYS frontman Jason McMaster once again spoke about the time he was approached by PANTERA about possibly singing for the group before Philip Anselmo connected with the fellow Texas metal act.

"I like talking about this, only because it clears up some things," Jason said in part (as transcribed by BLABBERMOUTH.NET). I was offered an audition. I never auditioned. I didn't accept the offer to audition.

"[PANTERA guitarist 'Dimebag' Darrell Abbott and drummer Vinnie Paul Abbott's] father called me first, which was interesting, that someone who could have been my dad is calling me, 'Hey, I'm Mister… And I'm looking…', kind of management style, and I'm just a dude, and I'm going, 'Woah, this is trippy.' And I turned him down. And then Vinnie calls me, like, two weeks later, and the same kind of a thing happened.

"But we — as in my scene in Austin — we had heard about people talking, 'Man, I saw this band PANTERA, and they played this, and they played METALLICA,'" he continued. "But they were saying they would play DEF LEPPARD — they would play the popular hard rock and heavy metal songs. It didn't matter if it was this new thing called thrash or whatever. I don't think that they were covering DESTRUCTION or SODOM or CELTIC FROST or VENOM, like me and my friends kind of wanted to, but they were [playing] the popular stuff. They were doing club circuits. They were wearing pink and purple and green and yellow on stage. They had big hair. And so it was kind of, like, the whole, 'Well, do you call them posers?' Well, you're not a poser if you believe what you do. And they were good. And everyone said how good they were. Darrell was always a guitar legend in Texas. The guy probably never had any lessons and he just learned from slowing down VAN HALEN songs. [He was] an incredible talent, and everyone knew it, even though there was never a citing of any of that, because in my circle, it was a little more hardcore.

"So, '86 comes around. WATCHTOWER's first record is out, 'Energetic Disassembly'. It's getting attention globally — still on an underground level, of course… We helped… I know it's a big crown to wear for me to say this, but I will insert the word 'arguably' WATCHTOWER, and if not myself, had a giant hand in kickstarting the thrash, the metal thing in Austin, Texas in '82.

"So, yes, the PANTERA camp calls me. [WATCHTOWER] was losing [guitarist] Billy White [at the time]. He was ready to jump ship from WATCHTOWER and start playing different styles of music and just rock guitar… So the last two shows we played with Billy White were the only two shows that WATCHTOWER ever played out of the state of Texas, and they were in the Bay Area in the first of October of 1986. I believe it was right before that that the PANTERA camp had called me to see where my head was.

"Years and years later — I think it was '95 — I'm standing behind the backline with Darrell and some of his party boys. It was PANTERA, of course, with TYPE O NEGATIVE in San Antonio, at Sunken Gardens… And I had a chance to just basically get right in Darrell's head and go, 'Dude, why me? 'Cause you hooked up with Philip, and this is working. This is some brutal, really awesome, I'll just call it rock music. This is exactly where you guys needed to be.' And he's, like, 'Man, Jason, you just had a good buzz. Everyone that we knew in the Dallas/Fort Worth area' — I'm paraphrasing — 'knew your name and was a fan of WATCHTOWER. And you were on a list. That's it.' It was a simple answer, and I was, like, 'Oh, okay. Well, that makes sense.' I realized how big of an honor it was by the time they blew up. And I was, like, 'Wow. These guys are cool.'"

According to McMaster, he had no idea at the time he was approached to audition for PANTERA that they would one day turn out to be such an influential metal act.

"I'll put my hands on the table and show you all my cards and everything by saying the riffs from 'Cowboys From Hell', who knows if they were even written at that point?" Jason said. "Who knew that they were going into this completely hardcore and/or arguably creating their own style of 'groove' metal. I don't really like the term, but it became a thing. As well as that they could thrash too. Who knew? 'Cause I didn't. I just thought they were this kind of glam rock band that did the cover band circuit, and that's all I knew about 'em… But I was really kind of blinded by my own worries with WATCHTOWER."

Founded in 1987, DANGEROUS TOYS released four full-length albums and one live album before unofficially disbanding at the turn of the millennium.

Although DANGEROUS TOYS continues to perform live, the band has not released any new material since 1995.