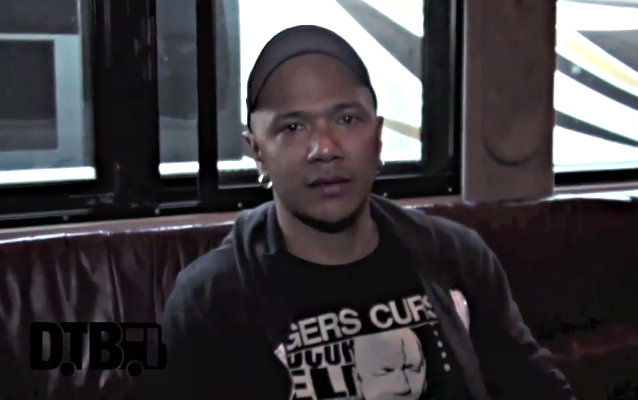 Digital Tour Bus, which gives fans "an all-access pass" to the tour buses that their favorite bands travel in, has posted its latest "Crazy Tour Stories" episode, focusing on Canadian rockers DANKO JONES. The one-and-a-half-minute clip, which was filmed on August 22, 2013 in Tinley Park, Illinois, can be seen below.

The official video for DANKO JONES' latest single, "Legs", can be seen below. With acclaimed and often controversial Canadian director Bruce LaBruce at the helm, they've produced a visually captivating video by mirroring the works of Pierre Molinier and applying an artistic-yet-eccentric use of sexuality.

LaBruce, who is best known for his sexually charged and culturally challenging productions, has been looking forward to working with the band for a long time.

"I've known Danko and John for many years, and I went to many DANKO JONES shows when they were first starting out in Toronto and in New York," he says. "After reconnecting with Danko last year at his book launch, we decided it was finally time for me to do a video for them."

The "Legs" video iis in line with the direct vision LaBruce had to create a spectacular and unexpected visual representation of the song.

"Danko suggested their song 'Legs', and for some reason I immediately thought of some of my sexy and leggy acquaintances in the M-F transsexual community.

"I really love the work of the famous photographer Pierre Molinier, whose gender bending photographs have influenced a variety of artists, so I decided to pay tribute to his work in the video."

Alongside LaBruce was art director Kenny Baird who, together with LaBruce, has worked notably with Floria Sigismondi on some of her most successful music videos, to help recreate the style and mood of Molinier.

This out-of-the-box thinking has resulted in a striking and unique video to join the long list of video installments the band has made over the years including the "Below The Belt" trilogy and their documentary "Bring On The Mountain" (both directed by The Diamond Brothers). Danko says, "Why this collaboration with Bruce LaBruce didn't happen sooner is beyond me. From writing the liner notes to our second release, to using our song in his 1999 movie 'Skin Flick/Skin Gang', Bruce's connection to our band is irrefutable."

This past year the band has been touring extensively. Not only have they sold out shows all over Europe and Canada, they have finished their two biggest U.S. tours to date; supporting VOLBEAT across the country as well spending 5 weeks on the road with the 2013 Uproar festival. They've also reached their highest ever radio ratings in the U.S. with the single "Just A Beautiful Day" peaking at no. 26 on the Active Rock charts.

This new collaboration with LaBruce is paving a new road of artistic creations for the band.

"For us, Bruce directing 'Legs' has been a long time coming, and, of course, good things come to those who wait," Danko says. "This music video is a trip. We love it. We know you'll love it too."