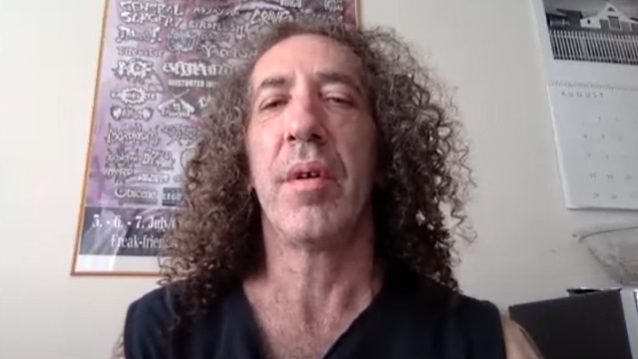 Bassist Danny Lilker of New York thrash veterans NUCLEAR ASSAULT says the group's June appearance at the Decibel Magazine Metal & Beer Fest: Philly could turn out to be their final United States performance. The band will play its seminal 1986 "Game Over" debut in full at the event.

In a recent interview with Decibel magazine editor-in-chief Albert Mudrian, Danny touched upon why NUCLEAR ASSAULT has resisted the ongoing trend of bands playing their popular albums front-to-back in a live setting. "It's funny," he said. "There's this thing now what they call 'deep cuts' and everything. Musicians laugh at that expression because that means 'shit you never wanted to play live' because you have an hour to play and you prioritize to play a few from this and a few from that. Now we're going to be playing a few songs from that record that we've never played. Those are deep fucking cuts, right to the bone. [Laughs] We've never done anything like that. S.O.D. [STORMTROOPERS OF DEATH] has, or at least my little S.O.D. franchise band that plays in different territories around the world with different dudes. But, no, NUKE has never done that."

Danny then shared the reasons behind NUCLEAR ASSAULT finally deciding to play all of "Game Over" for the first time in their career, likely putting an end to their live presence in the United States.

"We're going to be pretty much wrapping it up," he said. "Nobody is getting any younger. People have commitments and families and stuff like that. I've been to a couple of the Metal & Beer Fests and I was usually pouring or just hanging out and drinking or something. So, I think it's truly cool to be able to do this and I'm not kissing your ass here, at a nice, prestigious American metal festival. Also, I like beer. In all seriousness, it will be cool playing one of these. Like I said, I've been to a couple and when I go backstage and bullshit with people, I feel like, 'Shouldn't I be doing something?' I think it should be a lot of fun and that might be our last U.S. show, actually."

Decibel Magazine Metal & Beer Fest: Philly will take place June 10-11, 2022, at The Fillmore in Philadelphia, Pennsylvania. The event also features CANNIBAL CORPSE, CANDLEMASS, WOLVES IN THE THRONE ROOM, THE RED CHORD and VOIVOD, among others.

NUCLEAR ASSAULT's "Pounder" EP was released on CD and as a digital download in 2015 via drummer Glenn Evans's own Sidipus Records.

Prior to forming NUCLEAR ASSAULT in 1984, Lilker witnessed the birth of thrash metal as an original member of ANTHRAX, and was later a crucial component to S.O.D. and BRUTAL TRUTH.

While many thrash metal bands tempered their aggression with melody, NUCLEAR ASSAULT stuck to its guns throughout and in the process, released such thrash classics as 1988's "Survive" and 1989's "Handle With Care".