DANZIG and MINISTRY are confirmed to perform at this year's edition of the "Blackest Of The Black" festival, set to take place May 26-27 at Oak Canyon Park in Silverado, California. The two-day event will feature over 20 artists, with DANZIG serving as headliner on May 27.

The full lineup of this year's "Blackest Of The Black" was revealed by the event's curator, Glenn Danzig, during an appearance on tonight's (Sunday, March 26) edition of "Whiplash", the KLOS radio show hosted by Full Metal Jackie. The veteran rocker, who has been at the forefront of the hardcore/dark metal movement for more than 35 years, created this metal tour in 2003 as a way to showcase some of the darkest metal outfits that were getting attention commercially but not critically, leading to some hardcore metal bands reaching mainstream success.

The 2017 edition of the "Blackest Of The Black" festival will feature performances by the following bands:

According to Glenn, this year's festival will be a much grander experience than in previous years and much closer to the way he envisioned it at the event's inception nearly a decade and a half ago.

"This year we're finally upping the ante," Danzig told Full Metal Jackie. "We're doing it with a couple of partners now that have come in, and we're doing it the way I've always wanted to do it, which we've been building to, so now it's a two-day fest. It's not just bands. You're gonna get a ton of other stuff. There's gonna be rides. I got to pick the rides. We're gonna have Hell Hole, we're gonna have Spider. There's gonna be camping overnight if you stay from Friday to Saturday. The plan is to have a haunted drive-in with tombstones. You can just put your sleeping bag there and watch schlocky horror movies until you pass out. It's gonna be a whole thing. There's a 'Castle Danzig' you can go in. It's kind of like a horror funhouse, but not so... Like, there's a blood tub with one of my Verotik characters in the blood tub. And then there's gonna be exhibits and different things. So it's more of an experience."

Prior to this year's installment, Danzig had taken the "Blackest Of The Black" tour on the road six times: 2003, 2005, 2006, 2008, 2010 and 2015. Past outings of the several-band package have included a cross-section of supporting acts, both veteran and up-and-coming groups in the metal underground like SUPERJOINT, TOXIC HOLOCAUST, POSSESSED, BEHEMOTH, MORTIIS, WITHERED, SKELETONWITCH and MOONSPELL, to name a few.

"Originally ['Blackest Of The Black'] started out in 2003 as two shows — one in Phoenix at the Mesa Amphitheater and, of course, one at the now-defunct Universal Ampthitheater," Danzig said. "And my whole idea originally was to have it kind of like this, but getting that support from a lot of people who didn't really believe in it in the beginning was tough, and now, finally, after all these years, people are ready to take a chance on it. There's nothing like it."

If this year's "Blackest Of The Black" does well, there are tentative plans for the festival to go even bigger next time around.

"Well, of course, the challenge is making it a reality," Danzig explained. "Going from your imagination to making it happen and seeing if you can make it happen. There are things, obviously, we'd love to do that we just can't make happen — we'd need a bigger budget — but maybe in the future. If this is a real big success, I know we've already got plans for next year. And if what we have planned for next year actually happens, it's gonna be awesome."

Danzig went on to say that part of his original inspiration for "Blackest Of The Black" was the fact that "in Europe, they have lots of festivals like this and we don't. And a lot of these bands you won't see on a mainstream festival, so this is gonna be a game changer, especially if it's a big success, which we're hoping it will be. And you're gonna get to see predominantly metal bands."

Glenn had one final message for anyone thinking about attending this year's "Blackest Of The Black": "People have always complained there's nothing to do Memorial Day weekend. Well, now you've got something to do. So definitely come out and support it."

Camping is the easiest and most relaxing way for fans to immerse themselves at the Blackest Of The Black festival. They can wake up just a short distance from the festival gates and stumble "home" after the show.

The campground check-in will begin at 2:00 p.m. on Friday, May 26. The proximity of the campground to the venue will allow campers to walk to and from the festival grounds freely while event doors are open.

Camping spots are very limited, offering tent only, tent and car, and dry RV camping spaces. Campground amenities include complimentary showers and restrooms, general store, food and beverage for sale, as well as games and activities. 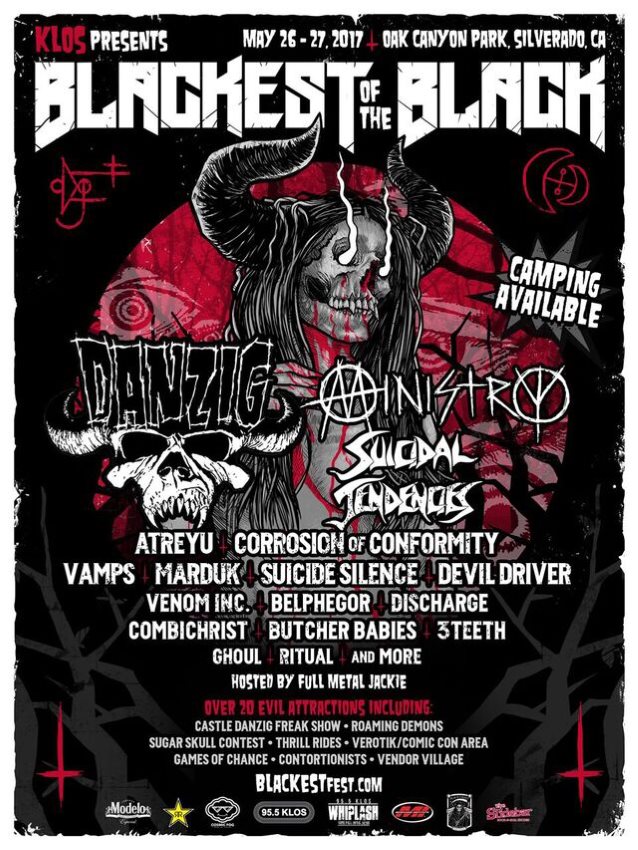