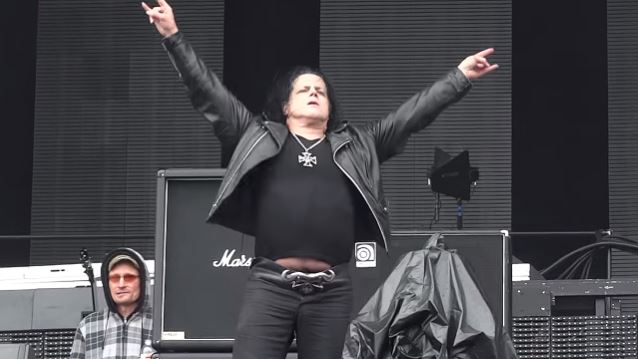 Glenn Danzig's "Danzig Legacy" TV special — which was filmed in May 2012 in Glendale, California with director Mark Brooks (Adult Swim's "Metalocalypse") — will be made available in a few weeks via Vimeo. Brooks and Danzig finished all editing and post EFX and "it came out epic," according to a posting on Danzig's official web site.

In an April 2013 interview with Full Metal Jackie, Danzig stated about the "Legacy" TV special: "The 'Legacy' TV special was an idea that was brought to me and it was an idea that Mark Brooks had; he does 'Metalocalypse'. It was basically to do like a DANZIG 'Legacy' TV show loosely based on the Elvis [Presley] '68 Comeback special; it revisited a lot of his past and a lot of stuff. So we did that with the 'Legacy' TV show. It was performance pieces that I do, then there's the band playing live, we do [songs from] DANZIG, SAMHAIN. Then for the MISFITS thing, we did what Elvis did when he sat down with Scotty Moore and the Memphis Mafia and we just did them all right there live, sitting and everyone's around us; there's no backstage, we're just on a little podium in from of everybody. And so we did a bunch of MISFITS songs and Steve [Zing] was just playing on a cylinder or something; it was pretty cool. We were doing the 'Legacy' shows anyway around that same time period, so we just thought we'd put it on film while everybody was there."

He added: "Especially when we were doing the shows, and then going and doing the TV special with the very intimate audience, it was really cool just seeing how much the music affected all of the people that are really into it. It's so many different generations of fans. It put a really cool perspective on it, and I think everyone's going to enjoy it. I know the people that were there really enjoyed it. I think I'm playing one of the songs and my tooth falls out, like a cap or whatever it is like in the middle when I'm about to sing. I'm, like, Hey, my fucking teeth fell out,' so it's just stuff like that that's just happening spur of the moment because it's live."

The new studio album from Glenn Danzig's namesake band is set for a fall 2015 release, and his long-awaited covers effort is due later this year. He is also working on an EP of Elvis Presley covers.

DANZIG's cover version of the the classic Lee Hazelwood/Nancy Sinatra song "Some Velvet Morning", featuring a guest appearance by Cherie Currie (THE RUNAWAYS),was made available for streaming in 2014. The track was supposed to appear on Danzig's covers album, which was also due to include Glenn's renditions of classic songs from BLACK SABBATH, ELVIS PRESLEY and ZZ TOP, among others.

The first new DANZIG studio album in six years, "Deth Red Sabaoth", sold 11,700 copies in the United States in its first week of release to land at position No. 35 on The Billboard 200 chart.

"Deth Red Sabaoth" was released on June 22, 2010 via Evilive/The End Records. Produced by Glenn, the CD was recorded in Los Angeles over the course of 2009.