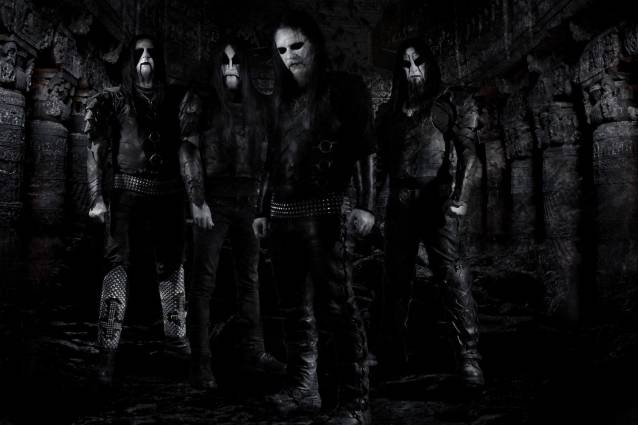 DARK FUNERAL guitarist Lord Ahriman (real name: Mikael Svanberg) recently spoke with The Offering webzine. The full conversation can be seen below. A few excerpts follow (as transcribed by BLABBERMOUTH.NET).

On the group's latest album, 2016's "Where Shadows Forever Reign":

Lord Ahriman: "I still feel very strong about it. It's a great record, and it still represents me at this time. I really enjoy playing the songs live, and I think looking at the crowd response, the new songs are really [some] of the most popular songs that we play."

On when to expect the group's next album:

Lord Ahriman: "We're on tour now, and we're going to continue to tour the rest of the year. The plan is to start taking it easy next year and focus on the new record. I've recorded some ideas. We've been touring too much [to record]. It's been just not enough time to focus on writing new music. I prefer to take one thing at a time."

On his songwriting process:

Lord Ahriman: "Normally, I go with the flow. I have ideas where I wanna go, but you never know where you're gonna go when you actually start writing. Whatever comes out, comes out. I can't really do much other than that. That's the way I work, but I need to be in a certain state of mind when I write. Every note needs to have a meaning for me. It's very important. That's why I don't want [to] or can't write when I'm too busy touring. When I'm on tour, I want to focus on that and do a good job and give my best on stage every night, and when I write music, I just really need to sink into my own world and focus on that."

On the group's discography:

Lord Ahriman: "Each album is a big part of me. Each album reflects the era of time [in which] it's being written. Of course, I'm slightly different. I'm still pretty much the same guy I was 25 years ago, but of course, you change a little bit — you get more experience, and life takes different turns and you learn from that... With a new record, I think that [will] represent me pretty well where I'm at, at this point in life."

On what he enjoys about being a musician:

Lord Ahriman: "I feel very privileged to tour all over the world, see so many places and meet so many new people and try different kinds of foods and all those small things. I like being out on an adventure, I guess. You need to like that kind of lifestyle if you're a touring musician."

On the advice he'd give up-and-coming bands:

Lord Ahriman: "I receive lots of emails from other younger bands, and I always used to tell them the way I think myself. Of course, you can respect other bands and musicians and think they are really good and talented, but try to find your own style and your own way of writing. As long as you're satisfied yourself with what you're doing, it doesn't matter what anybody else thinks. You always need to have that as the first thing."

On the film "Lords Of Chaos":

Lord Ahriman: "Of course, it's going to attract a whole new audience [for black metal] and a lot of new people for sure. Other than that, I don't know. It's a weird movie. The only thing I kind of feared was the chaos that was around at that time, and all the partying that was going on and stuff like that. [Those] were things that I could connect to and recognize, but it was a lot of things that I felt was a little bit maybe not 100 percent correct. It was not a documentary. As a movie, it was fine. Let's leave it like that."

Lord Ahriman: "It's an easy way to communicate with people. We are a band that has lots of fans in countries that we never visit. Also, people have different kinds of problems to be able to go out to the show. I receive lots of mail from lots of people thanking me for doing the social media, because it helps them in the daily life and also helps them see what's going on outside of their own world... I really don't like being up in everybody's face like that, but still you have to do things you don't really like that much. I'm trying to keep it on a certain level. I don't want to be too personal, because I'm very strict with my private life. But when I'm tour, then I'm on tour. Then it's part of the job to meet lots of people and fans and stuff like that. Then it's easier to share, but when I'm home, I prefer to keep it fairly private. I like to separate my private life and the band life. That's very important to me."

DARK FUNERAL's latest album, "Where Shadows Forever Reign", was released in 2016 via Century Media. The group is currently participating in the "Devastation On The Nation" North American tour with BELPHEGOR, INCANTATION, HATE, VALE OF PNATH and NIGHTMARER.