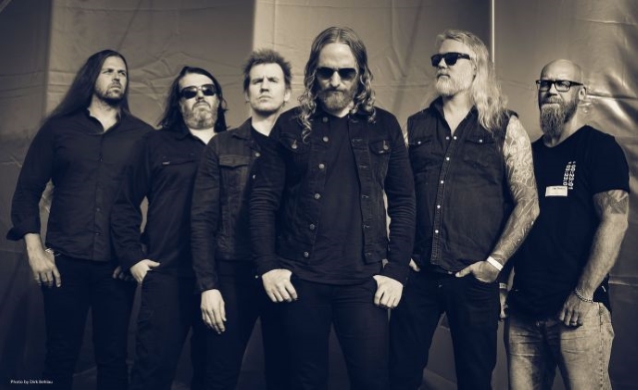 Prior to DARK TRANQUILLITY's recent performance at the French festival Hellfest, vocalist Mikael Stanne spoke with Metal Mad TV. The full conversation can be seen below. A few excerpts follow (as transcribed by BLABBERMOUTH.NET).

On the rigors of touring:

Mikael: "I really love it. Obviously, we have our ups and downs, and sometimes, you really don't want to go to work. Sometimes, we do 20 shows in a row, or more — 30 shows in a row, even. Sure, it's taxing. Your body hurts, but at the same time, it's so worth it. You become such an adrenaline junkie. That adrenaline and that kind of rush you get on stage is all you need."

Mikael: "You never really know what to expect. You hope for the best, but at the same time, you always have your doubts — like, 'Oh, maybe this is not going to work.' It's stressful. Even though we're used to it – we've done it many times — it doesn't get any easier. When the album came out and people dug it — and we went on tour immediately and played a lot of new songs every night, and people dug it and were really into it – we were like, 'All right, cool. This is the best review we need.' It's been great. We've done 350 shows or something like that, just for this album alone."

On when to expect new music from the band:

Mikael: "We are kind of gathering material and starting the pre-production process. The idea is to have things finalized by the end of the year and then start recording next year somehow, if everything works well. It's in the works. This year is kind of like an 'off' year — we only do a few festivals and no touring, so we're going to focus on writing and getting a new album ready."

On how he preserves his voice:

Mikael: "I try to take care of it. I warm up, and I have techniques to maintain it... I drink a lot of beer, but I do warm up every day just to make that everything works, and I have a good in-ear system so I don't have to scream too loud just to hear myself. That kind of stuff helps, but there's been a few years where it's been really rough that I struggled with it. You blow out your voice after a week on tour, then you have three more weeks and you can't recover because it's a show every day. But these last seven or eight years have been great. I haven't had any problems. I'm happy. It doesn't mean it sounds good every night, but I feel okay."

Mikael: "I am very concerned, of course. This is something that is threatening our way of life and our existence, so what do we do about it? [You can't say,] 'Not much. Who wants to change the way they live? We don't want to change our behavioral patterns. That's rough. Why would we want to change the way we eat or the way we travel?' People don't want to do that. That's not going to help, so we need to actively do something about it. I think it's happening. I think more and more people are realizing that this is an actual issue, and they are taking steps to kind of minimize their footprint and figure out a way to live in a way that they could be okay with, that they could be comfortable with. You cannot do everything, obviously, but small steps. It's not that hard. You can get an electric car. Sure, they're expensive, but they will pay off in the end. You don't have to vacation five times a year — you can do two. You can start having vegetarian meals every other day, or something like that. It's not that hard... For me personally, I like to support the companies that actually do good. Sure, it's a little bit more expensive, but you know you're doing a good deed, and eventually, those prices will drop and it will be more accessible for all. These small, little steps — you get an environmentally friendly car, you try to travel as [little] as possible. I stopped eating meat a while ago. You just try to do your part. Obviously, it's nothing in the grand scheme of things, but you feel better, and if that will inspire someone or you can inspire someone, awesome."