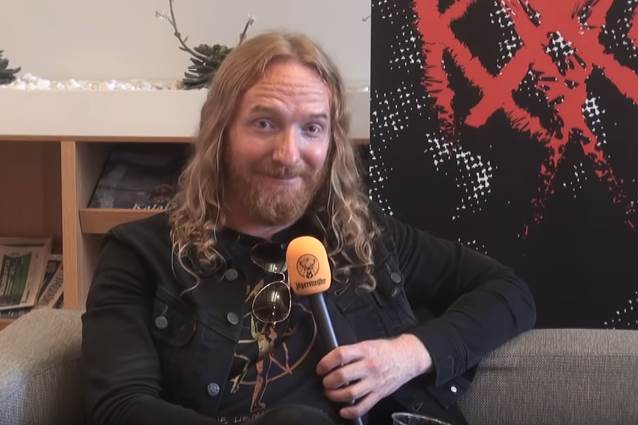 Swedish melodic death metallers DARK TRANQUILLITY are planning to enter the studio in early 2019 to begin writing material for the follow-up to 2016's "Atoma" album.

Speaking to Kaaos TV before the band's July 20 concert at the John Smith Rock Festival in Peurunka, Finland, DARK TRANQUILLITY vocalist Mikael Stanne stated about the group's plans for the coming months: "We're still gonna tour a little bit more. We do this summer, and then we go to America together with AMORPHIS, OMNIUM GATHERUM and MOONSPELL. So that's gonna be a lot of fun. It's gonna be fantastic. I'm really looking forward to that tour. Then we do something in December, I think, and maybe in January. But then, after that, we should get back in the studio and start writing again. We haven't started that kind of process just yet, but we will."

"Atoma" was recorded at Rogue Music in Gothenburg, the studio owned by DARK TRANQUILLITY keyboardist Martin Brändström. Mixing duties were handled by David Castillo, known for his work with bands such as KATATONIA, OPETH and CANDLEMASS. The cover artwork was once again created by the band's guitarist Niklas Sundin.

In early 2017, DARK TRANQUILLITY released a seven-inch single featuring the two songs — "The Absolute" and "Time Out Of Place" — which had previously only been released as bonus tracks of the limited-edition CD version of "Atoma". These cuts are the most experimental and daring numbers ever from the DARK TRANQUILLITY camp, featuring a very different approach to their usual brand of melodic death metal.