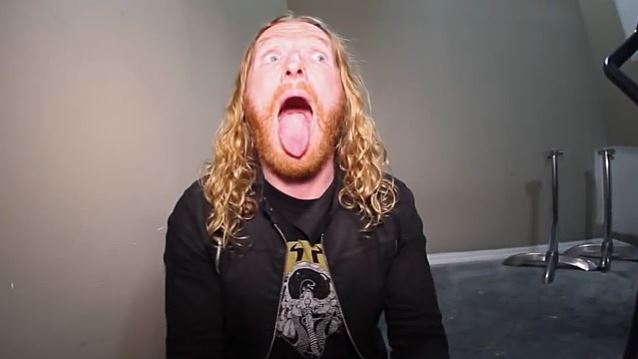 On January 4, Jo Schüftan of Horns Up Rocks! conducted an interview with vocalist Mikael Stanne of Swedish melodic death metallers DARK TRANQUILLITY before the band's concert at Gramercy Theatre in New York City. You can now watch the chat below.

Asked about DARK TRANQUILLITY's plans for the rest of 2015 after the completion of the band's current North American headlining tour, Stanne said: "This actually really concludes the 'Construct' touring cycle. [We will have played] 160 shows for this album — something like that — so once we're done and we're back [home in Sweden], we'll start working on a new album. [We'll play] a few festivals, but mainly, it's about writing. So I really, really look forward to that."

Regarding whether DARK TRANQUILLITY has already begin compiling ideas for its next album, Stanne said: "You need to kind of clear your mind and kind of get away from the whole madness of being on tour to focus on writing. But we started, and we have a lot of ideas and a of things [to work on], so I think we're gonna hit the ground running when we get home."

DARK TRANQUILLITY filmed a music video for the song "Uniformity" in April 2013 with Patric Ullaeus of Revolver Film Company, who has previously worked with DIMMU BORGIR, LACUNA COIL, IN FLAMES, SONIC SYNDICATE and KAMELOT, among others.