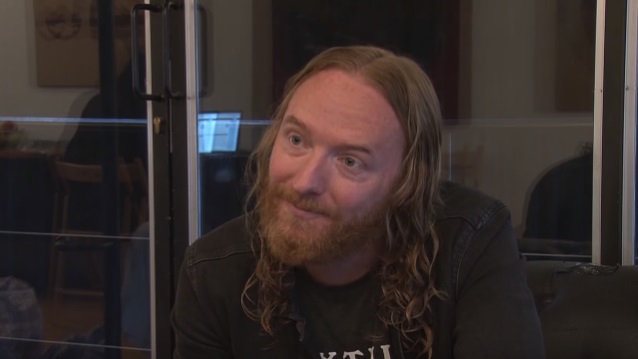 Slobodan Trifunović of Serbian Metal conducted an interview with frontman Mikael Stanne of veteran Swedish melodic death metallers DARK TRANQUILLITY prior to the band's April 18 concert at SKCNS Fabrika in Novi Sad, Serbia. You can watch the entire chat below. A few excerpts follow (transcribed by BLABBERMOUTH.NET).

Mikael: "It's been amazing, like, really, really cool. We've played a lot of new cities, a lot of new places. We've changed the set a lot from the last leg of the tour, which was a year ago. The response has been amazing. I think we sound and look better than we ever have onstage, so I couldn't be happier. The crowds have been incredibly welcoming and cool and appreciative, so yeah, I'm loving this tour so far."

On incorporating songs from "Atoma" into their live set:

Mikael: "I just think of it in terms of how songs work in a live situation, when we're onstage, playing together. We picked up some songs that we haven't played before from the album that we're playing now and they feel great. I can tell you that the reception of the new songs has been awesome and it's something that we noticed a year-and-a-half ago when the album came out because we started touring the same day the album came out. We started playing a lot of new songs, like six songs or something like that from the album. It worked immediately and it felt right and the audience was there with us. That's the best compliment you can get, that people are okay with us playing new songs and not just old stuff. In terms of where it is in the catalog, I don't know…it's going to take a few more years before you can realize where it is. For me, I'm just really proud of the fact that we pulled it off and we made it and it's working so well. This is the most touring we've ever done for an album. That speaks to the strength of the album, I think."

On the diverse nature of "Atoma":

Mikael: "There's a mix of everything in there as well. We honed the songwriting skills a little bit more. It's very much to the point, it's an immediate album. Sometimes that's the hardest part, to get the message across in a way like that, but I have no idea where we are going to go next, but I love where we are."

On the mixed fan reaction to their more "experimental" albums like 1999's "Projector" and 2013's "Construct", in particular "Projector", which was initially derided by critics for Stanne's clean vocals:

Mikael: "I think it's kind of natural because some people are afraid of change. If you see a band kind of changing a little bit, you go, 'Oh no! They've lost their way and they're going to go in a totally different direction that I won't like,' that kind of thing. So, that's very natural. As a fan, you're very protective of the bands that you like and if they start doing something you're not okay with, then, hey, you're going be worried. I get that, but I think with 'Projector', it was definitely like that. We heard it a lot, like worried, 'Is this going to be the next thing? Is this where they're heading?' For us, that was a way of us getting that out of our system. We wanted to prove to ourselves that we can be different and do something else and see if we can pull it off and we think we did. I think the same is with 'Construct' in some ways. I don't think people need to be worried. [Laughs] After 'Projector', people really started understanding we never want to go stale, we always want to innovate and progress."

On whether DARK TRANQUILLITY feels obligated to stay true to their Gothenburg melodic death metal roots:

Mikael: "Of course, that's always there. But, I don't think we really think about it. It doesn't affect us. I think more than anything, the thing that has always stuck with us is the way that we write melodies and that kind of thing. That's what our influences are and approach to the music [is]. Even though we try to change and get away from it as far as we possibly can, it's still there. It's still the same mental thinking and it's the same melodic language that's there. I don't think as far as we can get away from Gothenburg metal, it's still going to be there. I think that's good. It means we try our hardest to away from it, but we still retain what makes that genre special."

DARK TRANQUILLITY will team up with Finnish melancholic progressive metallers AMORPHIS for a North American co-headlining trek this September/October. Joining them will be Portugal's premier gothic-metallic-force MOONSPELL and Finnish melo-death contingent OMNIUM GATHERUM.