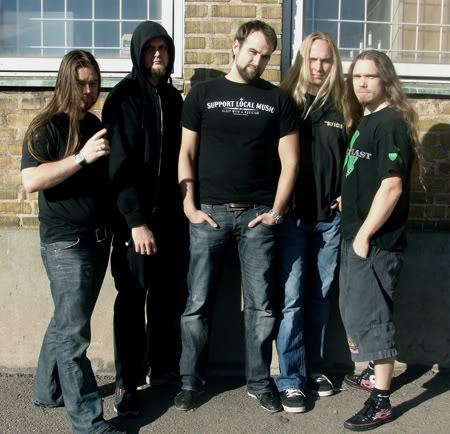 Guitarist Christofer Malmström of the Swedish thrashers DARKANE has issued the following update:

"I'm sitting with my laptop in my couch with the wife. She's watching a Swedish version of 'Top Model', so I thought I just might write whatever comes out (everything is better than watching that show).

"I've been reading Nikki Sixx's 'The Heroin Diaries' lately and I don't know what it is, but that man fascinates me. It's probably that I had a vision what is what like being a rock star in the '80s, and then when I got to read 'The Dirt' and 'The Heroin Diaries' it was so much more tragical than what it looked like in my innocent teenage rock magazines.

"If you have the chance you should read it... it's really facinating!

"Yesterday me, Peter and Andreas went to see DIMMU BORGIR in Lund, Sweden. The show was cool and we got a little chat with Galder backstage afterwards. He and the rest of the band were really cool.

"We have started to move into a new rehearsal room that we hope to build as a studio. We are looking into the possibilities to rent the top floor in the building as well, and then our dreams will come true. We hope we can build the studio so that Peter and Klas can work as studio technicians for a living, and we can record the new DARKANE album and mix the last of the live DVD sound. There has been so much stuff going on to delay our work, but now things looks a little brighter.

"I had a 'one-man guitar show' at Dunkers Kulturhus last week. About 130 people showed up which was very cool considering that I expected about 30. I played the guitar to DARKANE and NON-HUMAN LEVEL songs, and the reactions from the audience was very positive. We had a few cameras rolling, so I might put up a song or two when I have edited the result."

According to Malmström, Jens — who will also continue to sing in CONSTRUCDEAD and THE DEFACED – "grew up in Glumslöv, south of Helsingborg (a good friend of Björn Strid from SOILWORK),but now lives in Stockholm. His live debut with us will take place in three weeks at the ProgPower Scandinavia festival in Copenhagen, Denmark on November 10.

"We've been rehearsing hard lately and are very excited to work together with Jens. He has a huge vocal diversity and we are pretty sure that DARKANE fans won't be disappointed.

"We had our interests set on Jens at a very early stage and would like to thank all the people who showed their interest in joining DARKANE as our vocalist. We wish you all the success in the future, and we’d also like to congratulate Peter [Wildoer, drummer] and [his longtime girlfriend] Erika for getting engaged a few weeks back."

DARKANE drummer Peter Wildoer revealed last month that the band would start recording its fifth record this winter. "We have about nine songs ready," he said. "We were hoping to enter the studio earlier but in typical DARKANE bad luck, our studio got flooded and badly damaged. So now we're looking for a new location for the studio and as soon as we find that we need to rebuild the studio which takes a lot of time. Hopefully we will start recording around Christmas (fingers crossed)."

Check out a new band photo at this location.

DARKANE's upcoming DVD was shot in May 2006 in the band's hometown of Helsingborg, Sweden.

The band last year completed a European tour in support of their fourth album, "Layers of Lies", available now on Nuclear Blast Records. It is the follow-up to the band's third studio CD, "Expanding Senses", which was released in 2002.