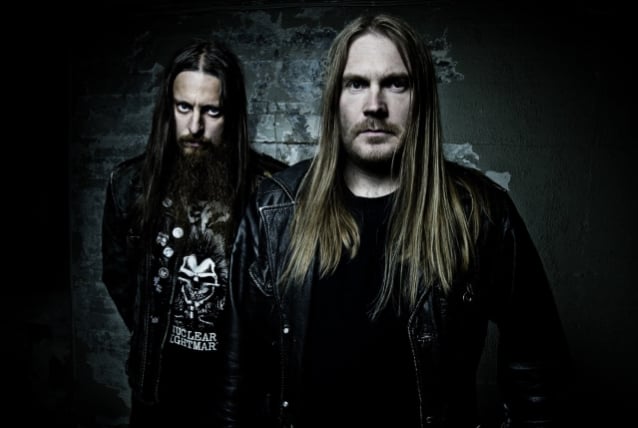 DARKTHRONE Is Working On New Album

Norwegian black metallers DARKTHRONE are working on the follow-up to their 2016 album, "Arctic Thunder". Vocalist Gylve "Fenriz" Nagell revealed in a Facebook post that "three songs are in the making so far," featuring a musical direction that is a continuation of the band's "brand of old primitive metal."

"Arctic Thunder" was recorded and produced by the bandmembers themselves, with the sessions conducted at DARKTHRONE's old rehearsal unit, The Bomb Shelter, which was originally used during 1988-1990. Mastering was once again handled by Jack Control at Enormous Door.

Asked in a 2016 interview with Music & Riots Magazine how DARKTHRONE manages to stay so prolific, Fenriz said: "It helps that I listen to so much metal and it helps the way we record. For ['Arctic Thunder'], we put the amp in front of the drum kit and we play real loud and hard on the drums. Doesn't matter that the guitar leaks into the drums and vice versa, the sound is hard and we don't have the means to do much with it afterwards. There is only mixing of levels and then the mastering. And that's it. This means it won't sound very controlled at all, it's not 'professional,' but at least it's fresh. People seem to like it. We must be one of the biggest underground bands or something. It's a strange position to be in."

DARKTHRONE forthcoming album: It seems we continue with our brand of OLD PRIMITIVE METAL and 3 songs are in the making...

Posted by Darkthrone on Tuesday, September 4, 2018