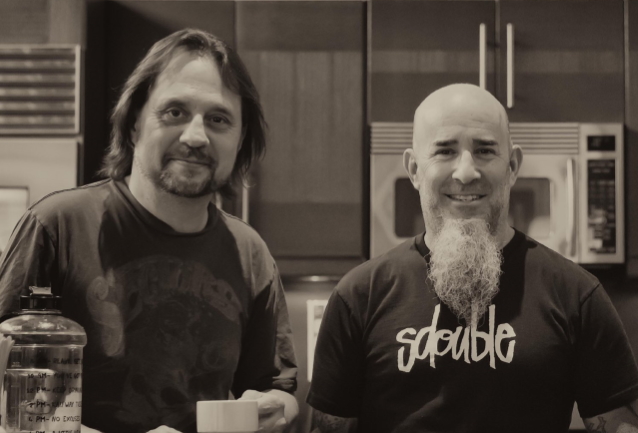 Drummer Dave Lombardo (SLAYER, SUICIDAL TENDENCIES, MR. BUNGLE) and guitarist Scott Ian (ANTHRAX, MR. BUNGLE) are featured on the score to the upcoming Netflix comedy-action film "Thunder Force". Due on April 9, the movie is written and directed by Ben Falcone ("The Boss", "Tammy") and stars Melissa McCarthy, Octavia Spencer, Pom Klementieff, Melissa Leo and Tyrel Jackson Williams. The comedy is set in a world overrun with super-villains and follows two childhood friends who reunite to battle the Miscreants that threaten to destroy Chicago. Falcone and McCarthy also produced the project with Marc Platt ("La La Land", "Bridge Of Spies", "Drive").

Composer Fil Eisler ("Empire", "Revenge", "How To Be Single", "CHiPs", "UnReal", "The Titan"),who helmed the "Thunder Force" score, tweeted earlier today: "On Apr 9th, #netflix releases #ThunderForce I have the pleasure of not only scoring the movie but having two of my childhood heroes @Scott_Ian and @TheDaveLombardo play on the score."

Lombardo shared Eisler's tweet and added: "April 9th!! Save the date comedy loving drumheads. ThunderForce is coming for you! Loving this experience and the brilliant score. Thank you @fileisler. It's a pleasure working with you, and of course jammin’ with my @mrbungle band mate @scottian."

Here is the "Thunder Force" plot via Netflix's official synopsis: "In a world terrorized by super-villains, one woman has developed the process to give superpowers to regular people. But when scientist Emily Stanton accidentally imbues her estranged best-friend with incredible abilities, the two women must become the first superhero team. Now, it is up to Thunder Force to battle the super-powered Miscreants and save Chicago from the clutches of The King."

April 9th!! Save the date comedy loving drumheads. ThunderForce is coming for you! Loving this experience and the brilliant score. Thank you @fileisler. It’s a pleasure working with you, and of course jammin’ with my @mrbungle band mate @scottian. https://t.co/djiQXZsJt4