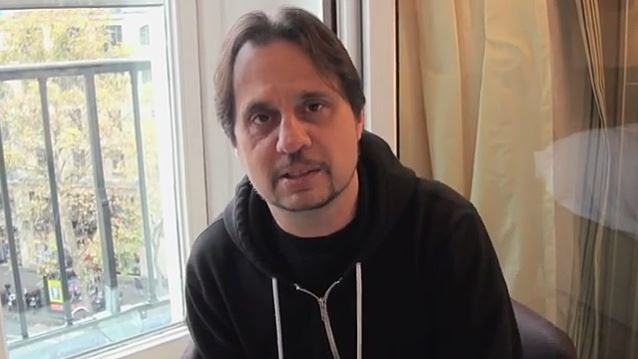 A BLABBERMOUTH.NET vistor by the name of Philip L. has filed the following report:

"I have just returned from [former SLAYER and current PHILM drummer Dave] Lombardo's clinic in Geneva, Switzerland (on November 26),which was very impressive.

"During the autograph session, Dave made it clear that he was open to the possibility of joining MEGADETH if the invitation were extended to him.

"As Dave was signing my copy of FANTÔMAS' 'The Director's Cut', I mentioned that MEGADETH are in need of a new drummer as of yesterday. Lombardo looked up with a big smile and said, before a number of other fans (verbatim): 'I know. I just heard. Dave [Mustaine] has my number, so I'm waiting.' He looked up at us, grinned, and moved on to sign the next fan's item. He might have made this reply in jest, but if nothing more, this indicates that Lombardo is open to the possibility of replacing MEGADETH's Shawn Drover. He appeared genuinely interested in the opportunity.

"Lombardo stated during the clinic that he has touring plans with his new project, PHILM, in the immediate future, but he didn't mention this in his reply to me concerning the MEGADETH slot.

"If Dave Mustaine is interested and were to reach out to him, there are strong chances that Dave Lombardo would consider collaborating with MEGADETH, especially now that he is no longer a member of SLAYER.

* Dave mentioned that he is often called 'Il Padrino' ('The Godfather') by the younger generation of metal drummers who consider him an innovator and the first extreme metal drummer.

* Dave appreciates extreme metal drumming and enjoys borrowing some of its techniques (he used blast beats on 'Christ Illusion', for example),while remembering that he in many ways paved the way for it. He described his attitude to it as a give-and-take relationship.

* Lombardo mentioned that he is self-taught, and a very open-minded musician. He grew up listening to jazz, classic R&B and Cuban music, to which he added fast beats by hitting pots and pans in the kitchen as a child. He mentioned that he began that particular day by listening to Andrea Bocelli. Lombardo in fact ended the clinic by adding double-bass and SLAYER-style drumming over a Ray Charles track.

* He doesn't recommend smoking as a drummer...

* One of his worst experiences was a near-miss accident in the '80s when he lost control over his vehicle and the car started sliding on ice (the car was also occupied by Jeff Hanneman, Kerry King and a crew guy).

* Lombardo didn't use clicks while recording any of the SLAYER albums (including 'Reign In Blood'!)

* When asked about Lars Ulrich's drumming, he smiled and said: 'Oh no, not again. I can't say anything about this anymore. No comment.'"

Guitarist Chris Broderick announced his departure from MEGADETH a few hours later, saying that he was exiting the group "due to artistic and musical differences."