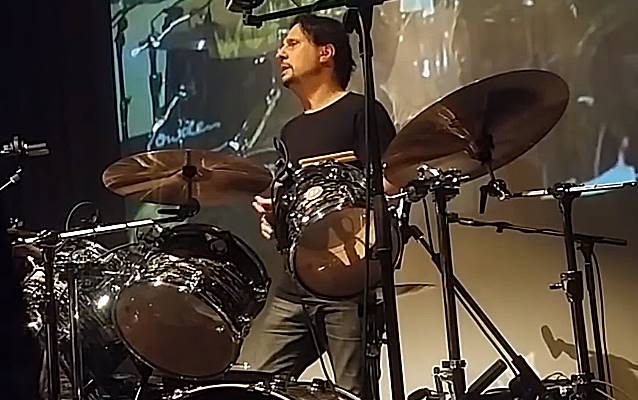 Ex-SLAYER drummer Dave Lombardo says that he "did his best" to work things out with his former bandmates before being fired from the group early last year, claiming that most of the money SLAYER made on tour went to the band's managers and accountants and not the musicians themselves.

Lombardo released a statement in February 2013 revealing that he "discovered 90% of SLAYER's tour income was being deducted as expenses, including the professional fees paid to management, costing the band millions of dollars and leaving 10% or less to split amongst the four of us. In my opinion, this is not the way a band's business should operate. I tried rectifying it by letting my bandmates know, and Tom [Araya, bass/vocals] and I hired auditors to figure out what happened, but I was denied access to detailed information and the necessary backup documents." He added: "I was told that I would not be paid until I signed a longform contract which gave me no written assurance of how much or on what basis management would deduct commissions, nor did it provide me access to the financial budgets or records for review. It also forbade me to do interviews or make statements having to do with the band, in effect a gagging order."

Lombardo, who has just completed a short European drum workshop tour, was asked about his departure from SLAYER while taking questions from the audience on March 5 at the Crescent Arts Centre in Belfast, Northern Ireland.

"I did my best to try to keep it together, but I couldn't go on, man," Dave said (see video below). "I had to step out, because you can't be shackled like that; nobody can take advantage of another person like that anymore. I did it for too many years, and I held my breath. Red flags kept going on in my books. It's, like, 'Really? I'm supposed to make more money? Why am I on the same salary? I'm making the exact same thing I've been making the past two years. And this is back in 2004. So I knew something was up. And I tried my best to work it out with the guys. I brought Tom into the picture. I had Tom in a hotel room with me talking to my attorney, and my attorney was telling him everything their management company had been doing to them for the past 30 freakin' years. And we had an accountant, a forensic accountant, ready to go in there and look at the stuff."

He continued: "Tom got bought out. Management flipped him over a couple of hundred grand — who knows how much? — and Kerry [King, guitar] as well, to keep quiet and go against Lombardo. So they turned their backs on me. And on the last day, when I'm at rehearsal with them — and I saved it all the way until the end — I said, 'Guys, we need a new business plan. You guys have been on the same business plan after 30 years. Now I'm an income participant. In other words, I 'm a percentage holder.' So if you're a percentage holder, you have the right, and you're contracted, as a percentage holder, you have the right to see where all the expenses are going. Because here you are getting paid off of net, and then out of 4.4 million dollars, the band gets 400 thousand dollars. Where's the four million? And that's just 2011. [The rest of the money went to] lawyers, accountant and the manager.

"For the past 30 years, they were doing that to the guys. And they took my information… I'll never forget the day…. I just said, 'Guys, look at this. This came from your accountant.' And it showed all the money. It wasn't showing where the money was going, it was just showing 'gross,' 'expenses,' 'net.' And out of that net, I made, on tour, in 2011, 67 thousand dollars. Kerry and Tom, that was about 114 thousand dollars they made on tour. So if you did about 60 shows, divide that up between 60 shows… Anybody have a calculator? No, not 60… Let's say about 90 shows per year: 30 in the spring, 30 in the summer and 30 shows in the winter, in the fall. So you break that up per show… Really? It's disgusting. I bust my ass up there playing drums. I mean, I am just sweating, I'm beat. And for the guy in the Hollywood Hills, for his facials, his manicures… No, I'm not gonna play for that. No.

"So, guys, I did everything I could. All I can say, right now my schedule is open. I can do whatever I want whenever I want. I can go over to Europe, do some clinics, hang out with you guys."

In a November 2013 interview with Minneapolis City Pages, Araya stated about Lombardo: "Dave left the band originally in '91 or '92, After that, we brought in Jon Dette for two years and then we hooked up with Paul [Bostaph], who did four really great albums with us. Then he decided to move on. Our manager hooked us up with Dave again and when we were putting together [2006's] 'Christ Illusion', Dave offered to help out. We wanted to make things fair for him, so we offered him a contract with the band. Most recently, we were offered to tour Australia. When we were rehearsing, he seemed to do a 180 and said some things that kind of upset me and Kerry [King, SLAYER guitarist]. Kerry just looked at him and said, 'If you feel that way, then why are we even rehearsing for this tour?' So we wrote him a letter and said, 'Listen, we need to know if you're going to do the shows in Australia. If you're not, we need to do something about that.' We didn't get a reply. We were put in a position where we had to do something, so we got Jon Dette to play with us again. After what happened with the Australia tour, we made the decision to move forward and make him aware that we no longer needed his services. He was really upset about that. He wrote a rant on Facebook. He said some things that he shouldn't have. It really upset us. And it upset me. I was fuming. I couldn't believe that he would throw that out in the court of public opinion. After that, Jeff [Hanneman, recently deceased SLAYER guitarist], me and Kerry all got on the phone and talked about it. And Paul's name came up. It was a sure thing with Paul. He'd been in the band for over 12 years. So we gave him a call to see if he was interested and he was more than happy to. It was a no-brainer. He's an amazing drummer."

During an appearance on "The Steve Austin Show - Unleashed!" podcast, Kerry King stated about SLAYER's latest split with Lombardo: "When Dave was in [the band] this last time, I figured I'd be on the stage with him until one of us fell off the stage, dead. Things change. He got some bad advice and listened to some bad advice, gave us an ultimatum ten days before we went to Australia [to do the Soundwave festival tour]. And I said, 'I can't have this over my head.' And I feel bad for Dave to this day; I really feel bad for him because he shot himself in the foot. Maybe he thought he had the upper hand, but you ain't gonna get me…. Before I got home, I knew exactly what I was going to do for Australia."

Shortly into the tour for SLAYER's 1986 album "Reign In Blood", Lombardo left the group, citing financial concerns. Tony Scaglione of WHIPLASH was recruited to replace Lombardo; however, this lineup was short-lived, as Lombardo returned in 1987. In 1992, Lombardo left the group again due to friction with the other band members, particularly King. Paul Bostaph of FORBIDDEN took over as the band's drummer for 1994's "Divine Intervention" and 1996's "Undisputed Attitude", the latter being an LP of cover tunes. Following the recording of "Undisputed Attitude", Jon Dette replaced Bostaph, who left to concentrate on other projects. Dette was fired a year later and Bostaph returned to the fold. In 2001, Bostaph left SLAYER for good and was replaced by a returning Lombardo. Although this reunion was initally announced as temporary, Lombardo had remained with the band until early 2013.