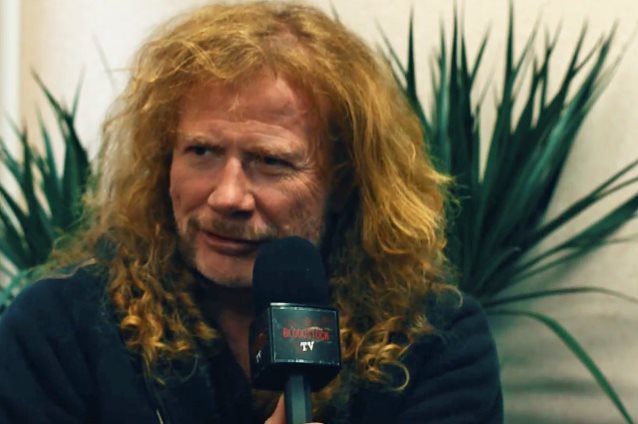 Dave Mustaine says that he has no intention of going back to live in California, explaining that "there's so much corruption in Los Angeles, it's just pathetic."

Mustaine and his family moved to Franklin, Tennessee, a suburb of Nashville, in October 2014 after living in Fallbrook, which is located about 45 minutes outside of San Diego, for a couple of years.

He later said that he relocated to Tennessee partly because he wanted his daughter Electra, who is a singer, to pursue her country music dreams.

Speaking to Bloodstock TV at last month's Bloodstock Open Air festival, Mustaine was asked if he had to leave sunny weather behind in order to come over and play for the MEGADETH fans in the U.K.

"I live, actually, in Tennessee now," he said. "I still have my mansion in San Diego, but we're trying to get rid of that, because we weren't gonna be going back to California anymore. We love Tennessee so much. It's just a beautiful place."

After the Bloodstock TV interviewer called California "almost like a country in itself," Mustaine said: "It's different now. I still love going and playing for the audiences — they're great — but I think that the government that's running the state there, they've kind of lost the plot. There's an off-ramp on the freeway where the 101 and the 405 meet. When I met [MEGADETH bassist] David Ellefson [in 1983], they were working on that off-ramp; they're still working on it.

"There's so much corruption in Los Angeles, it's just pathetic," he continued. "And I've known [Ellefson] almost thirty-five years now. Thirty-five years, those assholes are still working on the same piece of freeway. And nobody will do anything about it; people are gutless and scared."

California is thought of as a so-called progressive state, where Donald Trump lost by more than four million votes in November. The state is the biggest Democratic stronghold in the nation, and its leaders have been challenging Trump and his policies at every turn.

Tennessee is a deep-red state, where Trump received 61 percent of votes in the general election. But Nashville voted overwhelmingly for Trump's Democratic rival, Hillary Clinton.

Mustaine made headlines in early 2012 when he voiced his support for ultraconservative Republican presidential candidate Rick Santorum. He explained at the time that the Pennsylvania politician looked "like he could be a really cool president… kind of like a JFK kind of guy." That same year, he drew ire on social media when he suggested onstage at a concert in Singapore that President Obama was behind the mass shootings in Aurora and at a Sikh temple in Wisconsin.

Mustaine later blamed media outlets for taking his statements out of context, explaining that never said he officially "endorsed" Santorum. As for the Singapore concert, he claimed to have been repeating the theories of Larry Pratt, a pro-gun activist who runs the organization Gun Owners Of America.