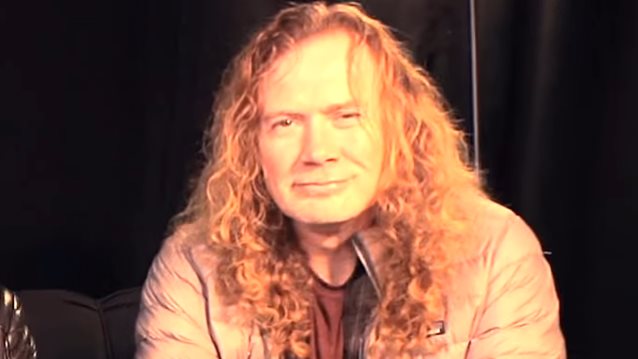 MEGADETH's Dave Mustaine spoke to Dean Guitars at this past weekend's NAMM show about what people can expect from the Megadeth Boot Camp, a once-in-a-lifetime experience for the ultimate fan. The epic weekend will take place on Mustaine's private estate in Fallbrook, California the weekend of March 10-12, 2017.

There are several "experience packages" available, with prices ranging from $1999 to $5499.

Said Mustaine (see video below): "I took some new pictures today of the property. It's an amazing place. We're gonna have a place for magical memories for everybody that's gonna be coming there.

"So far the tickets have been selling really great," he continued. "I don't know that it's gonna completely sell out. I think that we've planned on having a lot of people there, and since it's our first year, there's probably a really good chance everybody's gonna be able to come in. But I wouldn't hesitate and wait, because the more people are finding out about this and seeing everything that we're gonna allow them to do, the more it's becoming something that you want to do."

Mustaine added: "For example, we have the original tracks to 'Countdown To Extinction' there, and part of the whole party is centered around 'Symphony Of Destruction'. So if people wanna be in an additional part of the boot camp, all they need to do is say, 'I wanna be part of this singing 'Symphony Of Destruction',' and they go into the studio, which is on my property, and they get to sing along with the original song. Everybody gets a half hour in there. They go, they sing, they get their mix, and then forever they've got their version of them singing along in the studio with MEGADETH. And the last night, we're gonna have everybody up getting together on the hill to do — hopefully, if there's as many people as we're thinking — a hundred-plus people playing along to 'Symphony Of Destruction' together, which will be so freaking metal."

Mustaine recently told Q104.3's Jonathan Clarke that the Megadeth Boot Camp will include "a meditational program" and "non-denominational church service" with the band's bassist, David Ellefson, who has twenty-five years in a twelve-step program and who is a pastor.

Regarding the accommodation for the "campers," Mustaine said: "We're allowing people to camp on my premises. We have a bunch of really first-class tents that are going on there. And if you don't wanna be doing it that way — you know, 'glamping' [laughs] — there's a casino right down the road where we're working together with them. And there's gonna be a trip going to the vineyard where our wine is made, and there's gonna be a tour of that. So it's an all-around great experience."

The "Mustaine Estate Package + Megadeth Boot Camp" will get you the following: