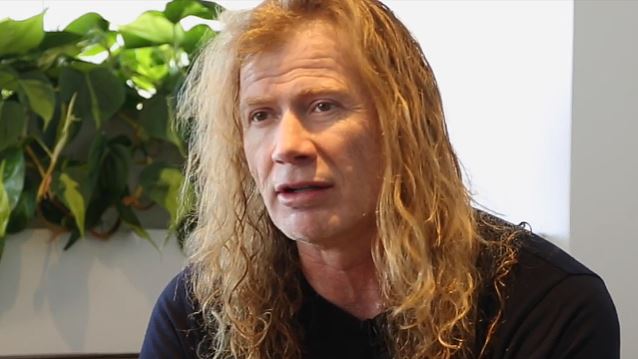 DAVE MUSTAINE: 'It Would Be Terrific' If STEVEN ADLER And IZZY STRADLIN Were Involved In GUNS N' ROSES Reunion

On the January 24 edition of "The Strombo Show", host George Stroumboulopoulos welcomed MEGADETH's Dave Mustaine for a little conversation to celebrate the release of the band's fifteenth album, "Dystopia".

Asked for his thoughts on the GUNS N' ROSES reunion, Mustaine said: "I don't know that that's going to happen. I certainly hope that it will, but, you know, in order for it to truly be a GUNS N' ROSES reunion, you've gotta ask yourself, 'Who's is gonna be there?' I think that it would be terrific if [drummer] Steven [Adler] and [guitarist] Izzy [Stradlin] was there too, because that would be really, really nostalgic. There's nothing really keeping them from doing it other than personal differences. And I understand — trust me, I just went through that with the [attempted reunion of the] 'Rust In Peace' [lineup] — so sometimes it's not meant to happen. But if it is, that would be so cool."

Mustaine went on to bring up GUNS N' ROSES singer Axl Rose's notorious stage tardiness, saying: "I love GUNS N' ROSES. I think Axl's a great frontman. I just hope that this thing that happened on 'Jimmy Kimmel' the other day [when Axl canceled his appearance on the show] isn't an indication of anything that is going to happen with the tour. I don't know that there's people nowadays that are gonna be hanging out for three, four hours waiting for somebody to show up."

He added: "If I'm having a good time, I wouldn't mind hanging out for an extra amount of time, if there was something going on. Or, like, say, homie's plane is stuck in traffic and it's hard for them to land the plane right now, so he's gonna be a couple of hours late to the concert versus the guy just doesn't wanna come out right now. Which I don't know what the real reasoning is behind anything or why anybody does anything but myself. And even me, fuck, I don't know the reason I do half the stupid stuff I do."

You can listen to Mustaine's entire appearance on "The Strombo Show" at CBC.ca (beginning at around the two-hour-23-minute mark).

Axl, guitarist Slash and bassist Duff McKagan, along with a lineup that may or may not include original or recent members of GUNS N' ROSES, are reuniting for four confirmed shows so far: two in Las Vegas in early April, and two headlining slots at California's Coachella Music And Arts Festival later that month.

The last time that Slash, Axl and Duff all performed live together was in 1994, although Duff has done a few shows with the latest GUNS iteration in recent years.

Speculation about a GUNS reunion exploded last summer when Slash revealed that he and Axl had repaired their estranged relationship, which prevented them from speaking for the better part of two decades.