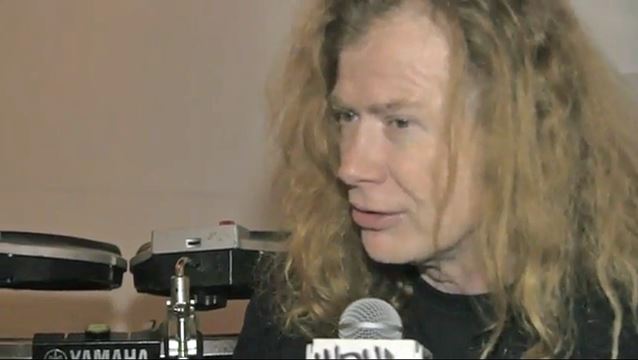 MEGADETH mainman Dave Mustaine was interviewed by Terrie Carr for the latest edition of "Box Of Rock" on WDHA-FM 105.5 FM, the rock music station licensed to Dover and Morristown, New Jersey. You can now watch the first part of the chat at this location.

Asked if it was fun to make MEGADETH's latest album, "Dystopia", after a period of uncertainty following the departures of drummer Shawn Drover and guitarist Chris Broderick in late 2014, Mustaine said: "Yeah, it was fun to make. It is fun with [the current lineup of] this band. We are having a good time. It's kind of renaissance for us in a way. We made a little bit of an adjustment with our management and some of the staff on our crew, made a couple of musician adjustments and, 'Voilà!' Here you are."

Mustaine also talked about the addition of MEGADETH's latest members, drummer Chris Adler (also of LAMB OF GOD) and Brazilian guitarist Kiko Loureiro, best known for his work with ANGRA. He said: "[There are a lot of] reasons to like and love these guys, besides their playing. They're very good to the fans. They're very decent men that have a lot of integrity.

"We love to play," he continued. "We're not going out and getting ripped and catting around and doing all kinds of crazy, dumb stuff that bands usually do. We're all about the performance. We're all about making the show better. We're all about preparing for what's next. We're already talking about revisiting the crazy 'Thrashing In The Snow' [sketch promoting a fake Christmas album that] we did on 'Fallon' a while ago. So, for whatever reason, it's kind of on our radar about doing something fun like that. Versus when you get out of the studio and it's, like, 'Man, I never wanna see that guy again.' So we're already thinking about what's next, what's the next fun thing that we can do. And while we're not in the studio, how do we continue to improve on ourselves as performers?"

Mustaine went on to credit his new bandmates for making his time on stage a bit more enjoyable. He said: I've got a big job. There's a lot of really super-talented frontmen out there, so for me to play guitar and be a frontman, it's two completely different attacks that you have to have. And I lean more on the guitar playing than I do the frontman part, but with Kiko and Chris being here now, we've been able to have so much… Like, I used to not talk in between songs; I barely would talk at all. And I'm talking now, because we're having fun. You know, before, it was like, 'I can't wait to get off stage.' And not because of the fans or anything like that. It's just that you're playing up on stage and three guys are getting along and one guy is not, and it goes on over and over and over again. It's like when you're a little kid and you pull one of the fly wings off. Not that you did that. Not that I did that either, but… [Laughs] You know, and you just realize you're going nowhere. I think right now, we may not know where we're going, but we're going there fast."

On April 8, Universal Music / Tradecraft / T-Boy Records will issue "Dystopia" as a limited-edition vinyl picture disc featuring the album's vivid dark and chilling artwork which takes the bands long-time mascot Vic Rattlehead to a whole new level and drops him into a bleak, futuristic dystopian universe.

The "Dystopia" picture disc can be ordered individually at all participating retail and online outlets or at UMv as part of a specially priced pack with other picture disc titles including "Peace Sells…But Who's Buying?", "So Far, So Good…So What!", "Rust In Peace", "Countdown To Extinction" and "Youthanasia".