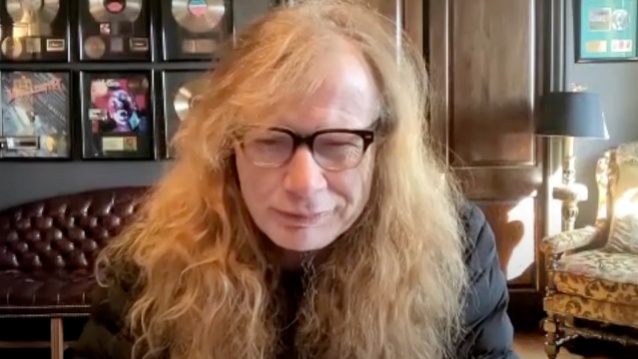 In a new interview with Loudwire, MEGADETH's Dave Mustaine said that the plan is still for the band's sixteenth studio album, "The Sick, The Dying And The Dead", to be released this summer. "I sure hope so," he said (as transcribed by BLABBERMOUTH.NET). "I think it's July 8th. I think that was the latest we heard for a release date. I think it could possibly be scooted forward a little bit, but I think that would actually be worse than if it stayed where it was at. You need every little bit of time to let people get everything all set up with all this COVID shit. It's been really difficult to ship anything, let alone records."

Regarding the musical direction of the new MEGADETH material and how the recent return of bassist James LoMenzo has affected the band's sound, Mustaine said: "I like to push things as far as I can right because of the — not only the ability but the excitement level that Dirk [Verbeuren, drums] and Kiko [Loureiro, guitar] have with their playing ability right now. Our guest bassist that we had [on the new album]" — rumored to be Steve DiGiorgio (TESTAMENT, DEATH, SADUS) — "he was a fantastic player. And having James be part of the band again… I remember there were so many, many wonderful nights playing with him. So when the situation kind of revealed itself that we needed to make a change, James was pretty much the obvious choice."

Two months ago, Mustaine confirmed that LoMenzo will play bass for MEGADETH when the band returns to the road in April for the second U.S. leg of "The Metal Tour Of The Year". Joining them will be co-headliners LAMB OF GOD along with special guests TRIVIUM and IN FLAMES.

Mustaine has yet to reveal who played bass on MEGADETH's new album after Ellefson's tracks were removed from the LP following his exit from the group.

In July 2021, Mustaine announced during an episode of his Gimme Radio program "The Dave Mustaine Show" that Ellefson's bass tracks would not be used on the new MEGADETH album.

In early May 2021, Ellefson released a statement on Instagram denying all social media chatter that he "groomed" an underage fan.

On May 24, 2021, Mustaine — who formed MEGADETH with Ellefson in 1983 — announced the bassist's departure from the band.