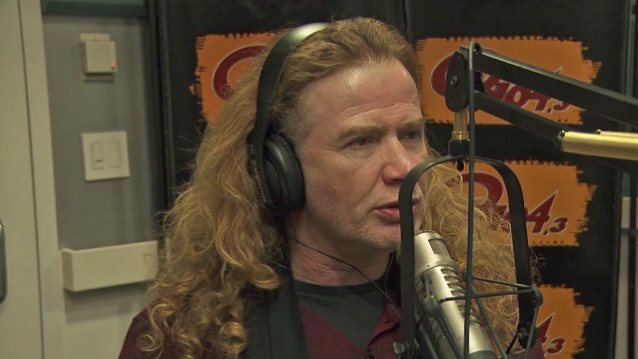 MEGADETH's Dave Mustaine spoke to Q104.3's Jonathan Clarke about what people can expect from the Megadeth Boot Camp, a once-in-a-lifetime experience for the ultimate fan. The epic weekend will take place on Mustaine's private estate in Fallbrook, California the weekend of March 10-12, 2017.

There are several "experience packages" available, with prices ranging from $1999 to $5499.

Said Mustaine (see video below): "It's gonna be at my estate in California. I still have my home in California. I live in Tennessee full time now, but I still [have a home] in California. It has a vineyard on it, it's got a river running through it, a two-hundred-year-old oak-tree-farm kind of area — real neat. And we're gonna invite all the fans. They come the first night. We kind of get to know everybody, and then we'll have dinner and have a wine tasting. And then the next day is all clinics all day long — how to play guitar, how to play bass, how to play drums, how to write lyrics… And then we're gonna have the brewmaster from [Canadian craft brewery] Unibroue [which collaborated with Mustaine on the official MEGADETH beer À Tout Le Monde], [he's] gonna be there. We're gonna have a couple of other people there. The producer that worked on the record with me. We're gonna be recording in my studio there. We're gonna have the original track to 'Symphony Of Destruction'. Anybody that wants to can go in there and sing the original lyrics over 'Symphony Of Destruction', make their own version to take home with them. That's like a side thing; that's not included in the pack. And then that night, we'll have dinner and beer. Saturday morning, David Ellefson [MEGADETH bassist], as a guy that's got twenty-five years in a twelve-step program, is gonna do a meditational program that morning. And then Sunday, since he's a pastor — some people would question that — he's gonna be doing a little non-denominational church service for us on Sunday morning. And then we're gonna do some more clinics and stuff like that. And Saturday night, we're gonna have like a s'mores party, and we're gonna sit around storytelling and stuff like that. And then Sunday, before we leave, we're gonna try and get all two hundred people to play 'Symphony Of Destruction' together and have this two-hundred-person army of acoustic guitars playing. 'Cause I figure somebody out of that two hundred is gonna know how to play it right, and they'll drown out the ones that don't."

Regarding the accommodation for the "campers," Mustaine said: "We're allowing people to camp on my premises. We have a bunch of really first-class tents that are going on there. And if you don't wanna be doing it that way — you know, 'glamping' [laughs] — there's a casino right down the road where we're working together with them. And there's gonna be a trip going to the vineyard where our wine is made, and there's gonna be a tour of that. So it's an all-around great experience."

He continued: "The other thing that's really cool too is it's a very romantic area, because you're in a wooded, hilly area near the beach. We're ten minutes as the crow flies from the ocean, and I imagine there's gonna a lot of people that are gonna be conceiving on my property. [Laughs]"

The "Mustaine Estate Package + Megadeth Boot Camp" will get you the following: