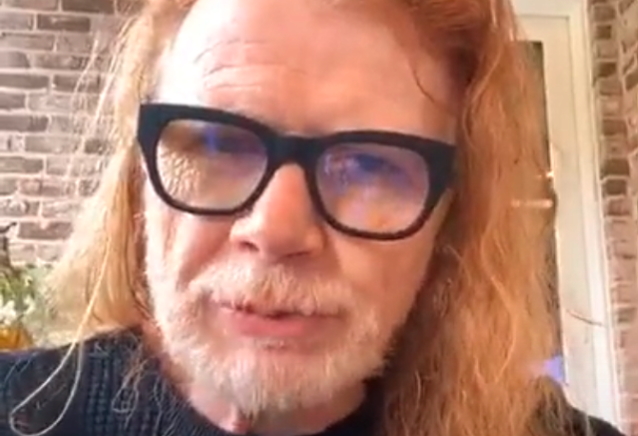 MEGADETH's Dave Mustaine took part in a "Virtual Mega Happy Hour" on Friday, July 24 from his home in Franklin, Tennessee via the Instagram account of Megadeth Beer. You can now watch video of the entire session below.

Asked by one viewer how the new MEGADETH album is coming along, Mustaine said: "The new record's coming along great. We've had a lot of setbacks, like cancer, but I think that we're doing great. I'm sure you guys will be surprised, and hopefully you'll like what you hear."

As for a possible release date for the LP, Dave said: "I don't know. We're still working on it. We're trying to decide how many songs are supposed to be on the record. We've got about eight songs, and then a couple of cover songs."

Mustaine also talked about MEGADETH's touring plans, saying: "Hopefully this corona stuff will be over soon and we'll be piecing together our tour routing. We've got dates set up for next year, and we'll be hopefully seeing a lot of you guys and bringing along a lot of MEGADETH beer too. So I'm sure you guys are looking forward to us getting out there and touring as much as we are."

He continued: "It's been a long time since we've toured, and just seeing all these people out there that wanna be entertained, and all this stuff with virtual concerts from their homes and stuff like drive-in movie concerts and stuff, yeah, that's all great, but I think us, as musicians, we wanna play, we wanna be in front of you and have that feeling. We wanna see you drinking the beers and we wanna see you raising your fist in the air and saying, 'Hell yeah.' So be smart, you guys. Wash you hands, wear your mask, keep your social distancing and drink lots of MEGADETH beer."

Mustaine recently told SiriusXM's Jose Mangin that the upcoming MEGADETH album will be "up there with 'Countdown [To Extinction]', 'Rust In Peace' and probably 'Peace Sells'" and "Dystopia".

MEGADETH's new effort will be the first to feature drummer Dirk Verbeuren (ex-SOILWORK),who joined the band four years ago.

Guitarist Kiko Loureiro made his recording debut with MEGADETH on "Dystopia", whose title track was honored in the "Best Metal Performance" category at the 2017 Grammy Awards.

Want to “have a beer” with @DaveMustaine? Well... he wants to have one with all of you! Join us on our @MegadethBeer IG LIVE at 5pm CST, 7/24 for a virtual happy hour with MUSTAINE from his home to yours + a chance to grab some killer giveaways for a select number of fans who tune in!!