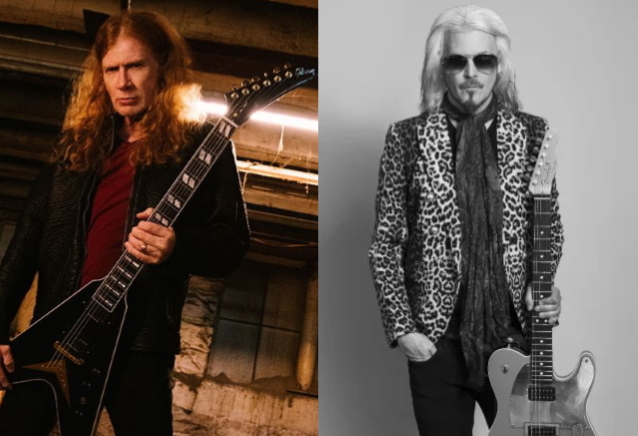 The former MARILYN MANSON and current ROB ZOMBIE guitarist revealed Mustaine's participation in the project during a new interview with Marci Wiser of the 95.5 KLOS radio station.

Speaking about his upcoming LP, which is titled "Sinner" and is due on Halloween, John 5 said (as transcribed by BLABBERMOUTH.NET): "I'm very excited about it. It's all instrumental, like my crazy stuff that I do. We have [original KISS drummer] Peter Criss playing drums on 'Georgia On My Mind'. And we just got it finished yesterday — hopefully nobody's upset I'm gonna talk about it — but we have Dave Mustaine doing a little vocal thing. 'Cause we have these little vocal hooks in each song. So it's super cool. And Mustaine did it. And it sounds so good. I love MEGADETH so much, so I was, like, 'Oh my God. We've gotta see if Mustaine will do it.' And he kills it."

John 5, whose real name is John William Lowery, first discussed Criss's involvement with "Sinner" during an appearance last month on Sirius XM's "Trunk Nation With Eddie Trunk". He said: "Peter Criss is playing drums on the song 'Georgia On My Mind', which is the last song on the record. And I'm telling you… This guy… Barry Pointer, my producer, flew out to Peter's house, set up a couple of mics. Now, this is a jazz type of song, and Peter is known for that jazz feel he has. I shit you not, he sat behind those drums, played two takes. Barry's mouth was dropped open. Wait till you hear this. I mean, it was perfect."

JOHN 5 AND THE CREATURES' latest album, "Invasion", was released in July 2019.