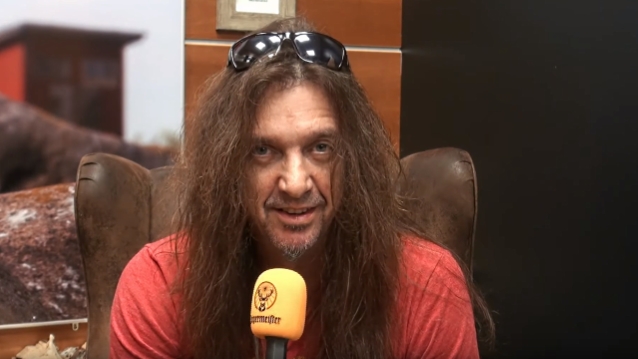 SKID ROW guitarist Dave "Snake" Sabo says that he has no interest in joining Sebastian Bach on his upcoming tour.

Bach will celebrate the 30th anniversary of SKID ROW's acclaimed, self-titled breakout debut album with a U.S. tour where he will perform the record in its entirety plus other songs from his celebrated catalog. The tour will kick off in Nashville, Tennessee on August 30 and will end in Pinellas Park, Florida on November 2.

Earlier in the month, Bach, who hasn't played with SKID ROW since 1996, said during an appearance on SiriusXM's "Trunk Nation" that he would love to see some of his former bandmates join him at some point during the tour.

"I would like to say right here right now [to] any original member in SKID ROW — there's five people in the world that can say that," Bach said. "We all know who the five guys are that made that record. I have an open invitation out to any of those guys, if they would like to get onstage and jam. I don't foresee that happening, but I'm throwing it out there.

"The bottom line is you only get so many '30 years's," he laughed. "It doesn't roll around too often — a 30-year anniversary. So, would I like to celebrate it with the original members? Yes, I would. Of course I would. But who knows if I'm gonna get hit by a truck tomorrow. So we're kind of like getting older now. So we can either shit or get off the pot [laughs], I think the saying goes."

On June 15, Sabo gave an interview to Finland's Kaaos TV and was asked if he had heard about Bach's open invitation to join him on the road this fall. "Well, yes, I did," the guitarist confirmed. When questioned about his thoughts on the prospect of re-teaming with Bach to play some of SKID ROW's classic songs, Sabo said: "I'm working with my band." Asked if that means that he has no desire to take Bach up on his offer, Sabo said: "No. This is SKID ROW. And this is what I do."

Although fans shouldn't expect to see Sabo on stage with Bach anytime soon, the guitarist says that he is not opposed to performing full albums with SKID ROW at some point in the future.

"I saw, a bunch of years ago — probably 10 years go — METALLICA do the 'Master Of Puppets' record from start to finish, and it was brilliant; it really was," he said.

"I think at some point, we would probably [do something like that]," he continued. "It's funny — we've talked about it, but we've never really pushed forward into it. And I think it's just because we wanna play [songs from] throughout the whole history of the band.

"For me on stage, I like experiencing the whole history of the band. But I would so be up for doing 'Slave To The Grind' or the first record in its entirety. That'd be fun. It'd be a lot of fun."

SKID ROW's final chapter of the "United World Rebellion" trilogy will tentatively be released in early 2020. The disc was recorded at a Nashville, Tennessee studio with producer Michael Wagener, who also helmed the group's 1989 self-titled debut and 1991's "Slave To The Grind".

This past January, Rhino released a 30th-anniversary remastered digital reissue of SKID ROW's quintuple-platinum 1989 debut album, which featured the hits "Youth Gone Wild", "18 & Life" and "I Remember You". The reissue also includes "Forever", a b-side recorded during the sessions for the album that previously appeared on the 1998 greatest-hits compilation "40 Seasons: The Best Of Skid Row", and a 10-track live performance recorded on April 26, 1989 at the Marquee in Westminster, California.