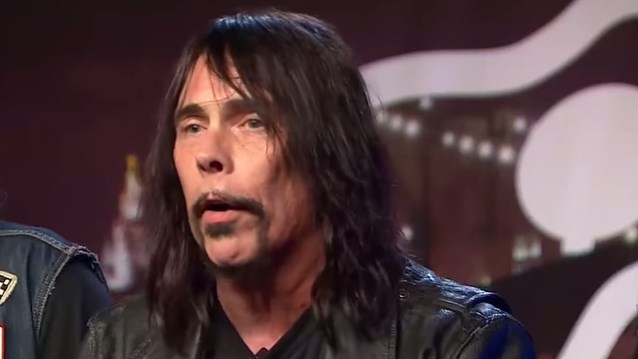 DAVE WYNDORF: Why MONSTER MAGNET 'Can't Get Arrested' In The U.S.

In a brand new interview with Smells Like Infinite Sadness, MONSTER MAGNET mainman Dave Wyndorf was asked if there are any plans for the band to tour the U.S. later this year.

"I've been trying to play the States but right now they're just not coming up with the dough," Wyndorf responded. "I mean, we can't get arrested in the fucking States. We'll probably play New York City. And if we can get out to the middle of the country and the West Coast, then we'll play L.A and Chicago. But everywhere else, man… it's like we're from a different planet or something. And sometimes the only people that do show up are like stuck in the '90s and go, 'C'mon, play 'Space Lord'!' And I'm, like, 'You'll get your 'Space Lord', plus you'll get all this other psychedelic stuff.' And it just doesn't seem to be enough."

He added: "The States is weird, and getting weirder."

Asked what he makes ofrock bands getting a better reception in Europe than in the U.S., Wyndorf said: "I think Europe has always had this way of looking at music, and all art, too, in fact. As if everything is a possible museum piece to be studied for its different merits. And it's not like they don't have their pop sensations there… they have plenty of stupid pop singers, over-the-top, ridiculous EDM and DJs. But there's a really big percentage of music goers, and young too, not just a bunch of old hair farmers… like, kids 18-30 who look at music the way that the mass public of the U.S. did in the early '70s, all the way through the '80s and '90s. Like, 'Okay, what do you got?' It's not just, 'What's the next big thing?' And I think that's kind of like what America's doing right now: What's the next big thing? Does it suit me? Is it worth going out for? Is it that important?' It's like the investigative spirit from the live concertgoer in America has gone down the toilet. They're, like, 'I checked this out online. It didn't look too good for me. I won't even give half the bands a chance by seeing them live. I watched a couple of YouTube shows. I don't like the way the guy looks, I saw the video.' It's stupid! It's just like they got it all figured out so they don't go!"

"I mean, do I sound crazy here? It used to be in the old days and it's still true in Europe where people discuss this shit. They're out their talking about it like they just went to the movies. Like, 'Did you see this band?' They're into it! Here? I just don't see that many people into it. I mean, I know they're out there somewhere. Maybe they're just inside! Maybe they got it all figured out. They're, like, 'This is not going to be cool. I watched a couple of YouTube shows… I saw their setlist online. I didn't like it!' And it's, like, you know something? Fuck you, guys; you don't deserve to get played to!"

Wyndorf continued: "The biggest thing in Middle America, the biggest bulk of what used to be touring… people are into either shit-kicking greatest hits like LYNYRD SKYNYRD, or hip-hop and shit rock. It's like the worst thing I've ever seen… no sense of humor. Art is like a dirty word out there. And you know the two cool guys in town? You know how like every one of those towns has like those two cool guys? Those two cool guys and that one cool girl are just fucking lonely. But you know what they do? They move to Austin, L.A. or New York…. somewhere where's there's an oasis of intellect. And that's what I just can't take about America.

"I guess I would play if there was just a bunch of dumbasses who would show up and pay the bills, but the two don't go together. At one point it did, but that was in the fat '90s when the economy was good. So I gave up… I mean, I could go back out there and beat my feet across the States two times a year, but I have a feeling it isn't worth it. Not right now. Now like what Europe offers where I can afford to do it there and pay my guys and the crowds are good and all kinds of stuff that doesn't happen here anymore.

"In Europe, if you want to go see a rock show and you're 15 years old, you get in. Over here, it's like pulling teeth to do an all-ages show. Insurance is more. People don't make as much as the bar. There's all kinds of economic reasons why these guys don't want to do an all-ages show, but that leaves bands playing to a much older audience, so there just ain't no growth… but in Europe, we've been going there for like 20 years and the shows get bigger… there's always new people. But here, with the exception of, say, Austin, which is an oasis of culture. Chicago is an oasis of culture… New York City, L.A, San Francisco… all the places you would imagine are cool are still cool. It's getting from one place to the other that's tough. I mean, everywhere else, people are just staring at their phone. It's, like, 'What's up? No, it's, like, what could be up? America is just waiting for something to happen for them on the other side of some device, like, 'Maybe this could be my big break! Something good's going to happen!' No. you're in something that's happening now! Pay attention to what's in front of your face right now! In Europe, it's not like that. They live in the moment."

Wyndorf added: "I would advise anybody that's into any kind of weird music… meaning, not mainstream, which is really not weird, because mainstream is just a wasteland right now. Anybody who is into anything besides what you hear in America on a daily basis, which is probably the most ungodly crap we've ever had… it's probably the worst it's ever been in mainstream music… There's no way any intelligent person would be, like, 'Yay, this is great! Anybody who is into any other type of music, go to Europe and don't look back. I mean, do you want to live your life playing in some shitty bar where some guy with a bald head and ponytail is looking at you going, 'Do 'Freebird''? Or do you want to go play in front of 26-year-old girls with big tits in Finland? That's where you want to go. And that's where I go!"

He concluded: "I do want to do as many shows as I can in the States, but without going broke. That's really the thing, because I have to keep the machine alive."