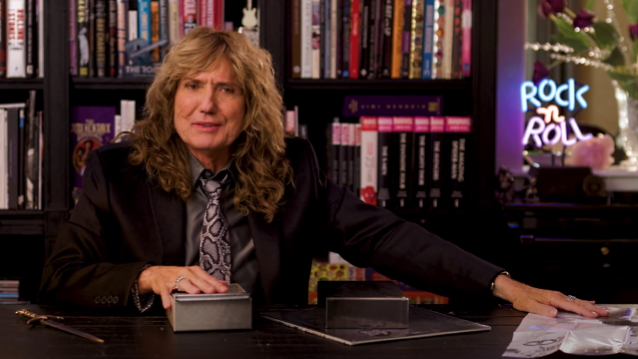 DAVID COVERDALE Has 'No Idea' Why LED ZEPPELIN Reunion Isn't Happening: 'I Would Love For JIMMY PAGE To Have His Dream Fulfilled'

WHITESNAKE leader David Coverdale, who collaborated with Jimmy Page on a well-received album nearly 30 years ago, was asked in a recent interview with the "Radio Forrest" podcast whether it's fair to say that Robert Plant is the lone holdout for another LED ZEPPELIN reunion. Despite promoter-led attempts to get the band to reform for a series of concerts, Plant remains committed to his new musical direction in the roots and blues-based "Americana" field.

Coverdale said (as transcribed by BLABBERMOUTH.NET): "That's not my territory at all. All I can tell you is that I would love for Jimmy Page to have his dream fulfilled to once again tour with LED ZEPPELIN. And Jonesy [LED ZEPPELIN bassist John Paul Jones] — they're great. And Jason [Bonham] is the obvious choice [to play drums for a reunited LED ZEPPELIN] — you know, the gene pool. [Late LED ZEPPELIN drummer] John [Bonham] was such an integral part — much more important than some people are aware, to have a drummer like that. It makes you structure music entirely different so the drums breathe. [They made] beautiful, perfect records."

Circling back to the prospect of a LED ZEPPELIN reunion, Coverdale continued: "I have no idea why it isn't happening. I'm just very happy that I have a great friendship and relationship, supportive, a mutual admiration society, with Jimmy. I had the great pleasure of [getting] the rights back to the COVERDALE PAGE record, and now we could do whatever we want with it. Because in 2023, it's the 30th anniversary [of the release of COVERDALE PAGE's eponymously titled LP]. And we have unreleased songs. We'll be doing a box set for that, as you can imagine."

Upon its release, "Coverdale Page" sold strongly, peaking at No. 4 on the U.K. album chart and No. 5 in the U.S. The album eventually went platinum in the U.S., despite the fact that the project as a whole was marred by the "LED ZEPPELIN clone" tag, including from Plant, who openly expressed his disdain for Coverdale, referring to him as "David Cover-version." Coverdale was equally vitriolic in his response, saying about the LED ZEPPELIN singer, "There's certainly no love lost between myself and Robert… I wouldn't send him cat food if he was starving."

LED ZEPPELIN's December 10, 2007 performance during the Ahmet Ertegun tribute concert was chronicled on the band's 2012 "Celebration Day" CD and DVD. The set, which featured Jason Bonham subbing for his late father on drums, marked Plant, Page and Jones's first full-scale show together since John Bonham's 1980 death.

After the the O2 Arena concert, Page and Jones were looking for a way to keep working and tried out several singers, including AEROSMITH's Steven Tyler and ALTER BRIDGE's Myles Kennedy.

The option for a three-quarter ZEPPELIN reunion ended when Jones accepted an offer to form THEM CROOKED VULTURES with Dave Grohl and Josh Homme. Page later said: "I guess that was a pretty definitive statement."