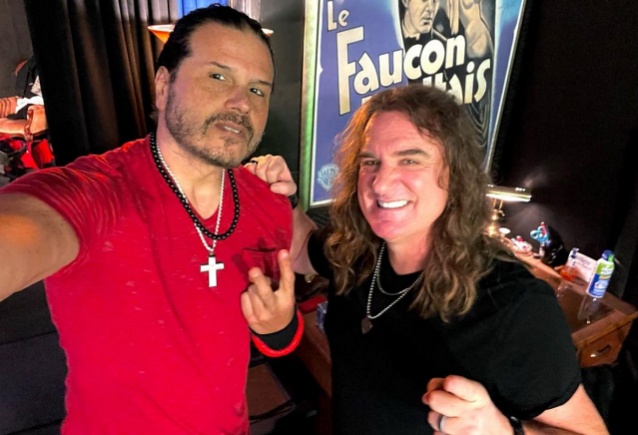 DAVID ELLEFSON And JEFF SCOTT SOTO Have 'Something Brewing'

Jeff Scott Soto appears to have reactivated his project with David Ellefson, three months after the singer said their collaboration was "on hold" while the former MEGADETH bassist was working through the fallout from his sex video scandal.

Last March, Soto and Ellefson announced that they had been collaborating on some new material under the moniker ELLEFSON-SOTO. The ELLEFSON-SOTO version of the RIOT classic "Swords & Tequila" was simultaneously released across all digital streaming outlets via Ellefson's Combat Records.

In October, Soto was asked in an interview with Dr. Music if the rest of the material he recorded with Ellefson will eventually see the light of day, Soto said: "I'm hoping it will at some point. I've given David, as many people have, the space and the time to kind of deal with his own things.

Earlier today (Tuesday, January 18),Soto shared an Instagram photo of him with Ellefson and he captioned it: "Something brewing in Los Angeles today....#davidellefson".

Ellefson was fired from MEGADETH last spring after sexually tinged messages and explicit video footage involving the bassist were posted on Twitter. At the time, Ellefson was accused of grooming an underage girl through videos and online messages. David has denied the allegation and has repeatedly said the woman in question had been a willing, consenting adult at the time of their virtual sexual encounter. Ellefson accompanied his denial with an alleged screenshot of a statement from the woman with whom he was supposedly involved at the time. In it, the woman admitted to recording the alleged intimate communications she had with Ellefson and called herself "naïve" for sharing them with a friend without the musician's permission.