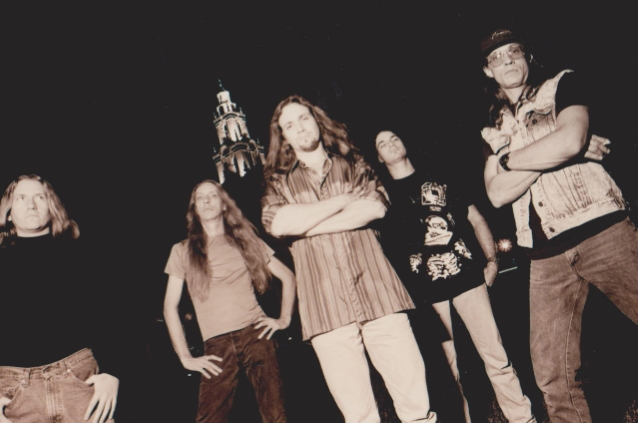 FATAL OPERA, the post-MEGADETH project of late classic-era drummer Gar Samuelson, will release its final LP, "Fatal Opera III", in the summer via Combat Records. The LP will also include guest appearances from ex-MEGADETH guitarist Chris Poland and MEGADETH bassist David Ellefson, who will appear on the track "The Raven", marking the first time Poland, Ellefson and Samuelson have appeared on a track together since MEGADETH's seminal "Peace Sells.. But Who's Buying". There will also be additional guest appearances from Poland, and NEW YORKERS bassist Robbie "Pags" Pagliari, marking the first time the original lineup of THE NEW YORKERS (Poland and Samuelson's pre-MEGADETH jazz/fusion project, also featuring guitarist Stew Samuelson) has appeared together on a commercial recording. Also making a guest appearance on "The Raven" is Ellefson vocalist, and Combat Records A&R, Thom Hazaert.

FATAL OPERA — Andy Freeman (vocals/keys),Stew Samuelson (guitar),Billy Brehme (guitar),Travis Karcher (bass) and Gar Samuelson (drums),formed in the early '90s, and released its self-titled debut in 1994, and independently released "Eleventh Hour" in 2018. "Fatal Opera III" is the final chapter in the band's legacy, featuring the final recordings of Samuelson, who passed away in 1999.

FATAL OPERA began work on a new album prior to Gar's passing, and the tracks sat for almost 20 years, until they were finally revisited. Enough tracks were found to create "Fatal Opera III", produced and mixed by Andy Freeman. The remaining members joined forces to finish the album that was started so many years ago, released in a fitting tribute and celebration to the legacy of Gar Samuelson, and FATAL OPERA.

Freeman says: "It was a long time in the making, but it truly was a labor of love, putting together this final release. It was an honor and a privilege to work with David and Thom, who helped make this album possible, and getting Chris and David together with Gar once again brought the whole project full circle. We are very pleased that it will finally see the light of day, and hope that it will be an offering to our fans, and a fitting final musical tribute to Gar."

Ellefson says: "Gar was one of the more unorthodox, unpredictable, and musically compelling drummers I've ever played with. His legacy continues to grow with the passage of time. So, it's an honor for me to have this posthumous performance with Gar, in honor of his incredible musicianship and legacy he left for us all to enjoy."

Hazaert adds: "After a few years of conversations with the FATAL OPERA guys, the record was close to completion, and the time was finally right to put it out. To be able to release Gar's final recordings, as well as the last things he did with his brother, Stew, also an intricate part of MEGA history, and to do it on Combat, is truly an honor. And when the idea was floated to have Ellefson and Poland on a track, and reunite the team one last time, I couldn't think of a more fitting tribute to the musical legacy and magic Gar, Chris and David helped bring to life on 'Killing Is My Business' and 'Peace Sells', and bringing Gar back to Combat where he started. And when Andy asked me to do guest vocals, I couldn't say yes fast enough. I have gotten to perform with both Ellefson and Poland, live, and on recordings, and to be able to participate in something so significant, and be on a track with both of them, as well as Gar, Stew, and the other guys from FATAL OPERA, as a fan, it truly is something I can't even put into words."