David Ellefson has checked in with the follow recap of the trek:

"Flying home from Chile, I'm excitedly exhausted from 10 days of some great times, great shows and good friends with HAIL! Between it all, we had a ton of laughs, saw some awesome new cities and gained some great memories from the road, especially some fanatical meetand-greets with the fans. Probably most fortunate was that the four of us put this thing together sight unseen with a concept to do shows in a far away foreign land, all of which meant taking the leap of faith to see if it would actually work….and it did. Now that's rock n roll!

"As most of you know, I've recorded and performed with both Jimmy DeGrasso and Ripper Owens before and we knew we'd be a great fit together. However, neither Jimmy or I had worked with Andreas Kisser before, but Ripper had done a 25th anniversary of Roadrunner Records recently and highly recommended him for the gig, as did our organizer/manager Abba (short for Mark Abbatista, NOT the band!). There couldn't have been a better fit than Andreas. A low-key man offstage but onstage a ferocious guitarist, well-rounded musician and even singer! He is truly the consummate pro. We all have such similar tastes in songs and music, it felt like we all grew up in a band together. After many years playing professionally, it feels good to just get in a room and play music for fun again…what a concept!

"Check out the photo gallery of pics from our shows and travels these past 10 days. Hopefully, we'll be able to bring this to other countries in the near future to HAIL! the metal together. For me, it brought back great memories of how passionate the people of Chile and South America are for their metal. To you we say, 'Muchas Gracias!'"

Video footage shot during HAIL!'s Chilean tour can be viewed below. 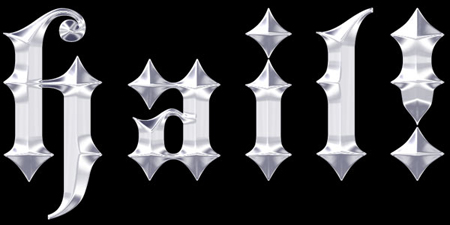 Video footage below is from HAIL!'s January 25 show at Arena Puerto Montt in Puerto Montt, Chile.

Video footage below is from HAIL!'s warm-up show on Wednesday, January 21 in Santiago.