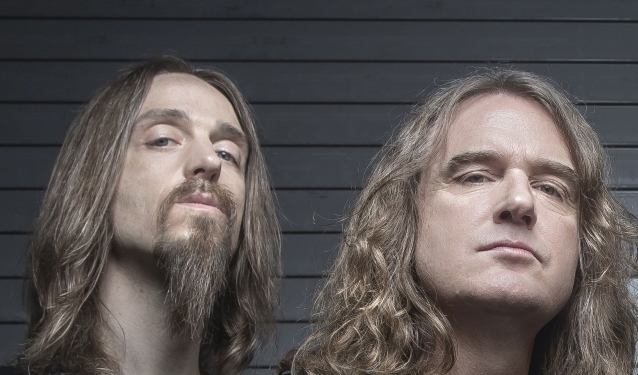 "Dirk is amazing, man," David said (see video below). "He's such a great player. And his drum work… Even as we were putting the bass and drums down, there's moments… I'm a RUSH fan, and as a bass player, Geddy [Lee] certainly being one of the greats, but the bass-and-drum relationship in RUSH is really of no equal — they're the top of the heap. And there were moments when Dirk and I were playing — although it doesn't sound like RUSH; it sounds like MEGADETH — I felt like we were hitting that same pinnacle. And I can't say that I've probably felt that before in MEGADETH. So that is a real testament, I think, to what Dirk is bringing to the band and to this new record — a skill set. He's a little bit younger. He kind of invented this grindcore drum style that he has, so to bring that in in a way that is unique… 'Cause a lot of people are going, 'Oh, is Dirk gonna play blast beasts on a MEGADETH record.' It's, like, listen, we can't have a drummer come in and just suddenly make MEGADETH sound like not MEGADETH. That's not okay. And Dave [Mustaine, MEGADETH mainman] has always been very good about that."

A few days ago, Mustaine told Q104.3 New York's "Out Of The Box With Jonathan Clarke" that MEGADETH was "in the process" of recording guitar solos for the new album. "Kiko Loureiro [guitar] is at the studio with me, and we're done with all the bass and drums and almost done with all of the rhythms," he said. "We've still got little punch-ins we need to do here and there, and then it's off into singing and solo land. And then probably the last thing, which is always my favorite thing, is the ear candy."

Mustaine recently told SiriusXM's Jose Mangin that the upcoming MEGADETH album will be "up there with 'Countdown [To Extinction]', 'Rust In Peace' and probably 'Peace Sells' and 'Dystopia'."

The effort will be MEGADETH's first to feature Verbeuren (ex-SOILWORK),who joined the band four years ago.

Loureiro made his recording debut with MEGADETH on "Dystopia", whose title track was honored in the "Best Metal Performance" category at the 2017 Grammy Awards.