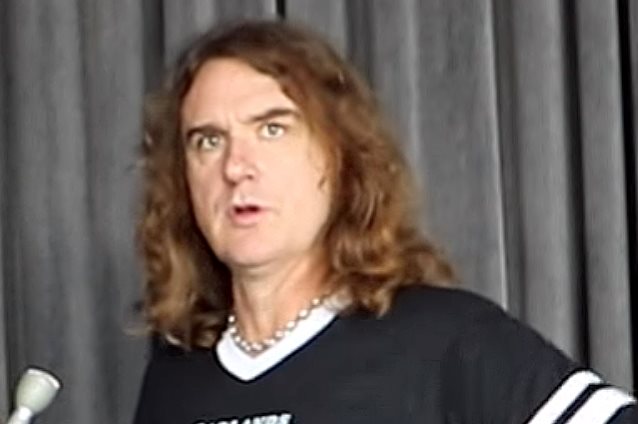 On May 29, Josh Guerra of Austin Underground conducted an interview with MEGADETH bassist David Ellefson at this year's River City Rockfest in San Antonio, Texas. You can now watch the chat below.

Speaking about the addition to MEGADETH's touring lineup of SOILWORK drummer Dirk Verbeuren, who stepped in for LAMB OF GOD's Chris Adler, Ellefson said: "[Chris is] not replaced. He has other commitments with LAMB OF GOD. In fact, the original idea was that [Chris] would come in and [just] record the [latest MEGADETH] record ['Dystopia']. And we get along great; we're a great hang. And so we thought, 'Well, let's try to keep Chris as much as we can,' because, especially now that he's played on the record, he really has some… he's kind of part of the DNA now of MEGADETH. So we thought, 'Let's try to keep him as much as we can.' And it's worked out, for the most part, pretty seamlessly. This spring and into the early part of the summer is really where the conflicts were, because he had other shows with LAMB OF GOD. So he had recommended Dirk. I think he'd actually recommended Dirk… If he ever needed a replacement ever, like if he fell down the steps and broke an arm, he'd call Dirk to come out and play for him in any situation, LAMB OF GOD or otherwise. So we were fortunate that Dirk was available and made the adjustments in his schedule to be able to come over here and join us. He's a world-class drummer, a super-cool dude, a great hang, and he's just got great energy. So I think Chris and Dirk are… Plus they're younger guys that kind of come from a younger generation of really aggressive drumming, and, man, that's exactly what we need. I mean, that's what all of the MEGADETH music has had in it from the very beginning."

Ellefson also praised Dirk's work ethic, saying the 40-year-old Belgian-born-and-now-Los-Angeles-based drummer was well prepared for the task at hand. "He showed up and did his homework," the bassist said." I mean, he showed up… I mean, he even had charts written, so he's obviously an educated, skilled musician. But he did his homework. He showed up, we did one rehearsal, and we were, like, 'Okay, we're ready.' And that's it. It gave us cool confidence to know we could walk out onto these big stages like today here in San Antonio."

On some of the early shows where Adler was unable to play with MEGADETH, he was temporarily replaced by Tony Laureano (ex-DIMMU BORGIR, NILE, ANGELCORPSE),the veteran extreme-metal skinsman who has worked as MEGADETH's drum tech since 2011.