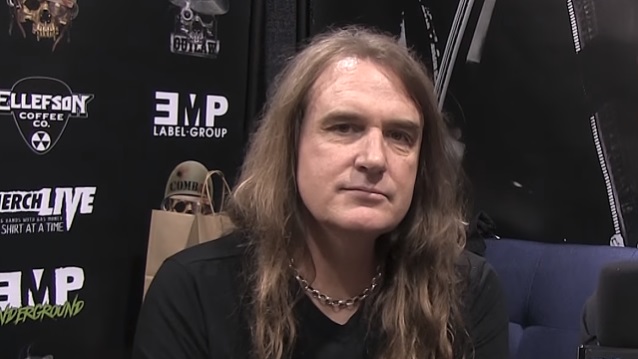 On creating numerous imprints under the EMP Label Group banner:

David: "MEGADETH was signed to Capitol Records for many years of our career, and I watched inside the EMI umbrella, they had Blue Note for jazz; they had Capitol, which was kind of broad, for a lot of other things; [they had] a Christian division and Capitol Nashville. And I liked that. When we started the label, I wanted [the name] EMP Label Group so that under its umbrella, we can have [different] things. We've got Combat Records now, which is very much for the thrash and punk stuff; we've got EMP Underground for the really hard death metal stuff; and [southern rock/outlaw country imprint] Outlaw."

On how his vision for EMP has changed since the label was created:

David: "My initial thought was, 'Hey, now I finally have a home to actually put out some of the groups that I produce.' When you take someone in the studio to produce them, you've still got to walk around the record business with your hat in hand and your tin cup out begging for a record deal. EMP initially started as that, as sort of a way to release the things I produced, and then it quickly became an artist development label. Then, Ron [Keel] and Mark Slaughter and a lot of our friends that [we've] grown up with over the years in the business, [they're] still making great records, and that's now really become another really big part of our business with the label — to be able to offer an opportunity for our friends to continue to put out the great music that they're still making today."

On the advice he gave EMP act DOLL SKIN:

David: "I told them early on, 'Look — you'll never be a hometown hero here in Phoenix until you become a hero somewhere else.' That was my goal. You've got to build this out on the road. Even today, with the record business being what it is — it's been changed so much by way of the Internet — there's nothing on the Internet that replaces people coming together in a room and all rocking out together."

On the advice he'd give parents of would-be musicians:

David: "Sometimes I'll do bass clinics or I'll be asked to give a talk at a certain event, and parents will sometimes ask, 'Little Johnny wants to go to Hollywood and be a rock star.' And you can tell behind it is this, 'Please say no to protect Little Johnny.' And my first answer is, 'Absolutely, he should go to Hollywood. Go — now is the time.' When you're young is the best time for any of this stuff. The music business has always been a young man's game — a young woman's game — at least to get things started. When you're young, you've got nothing to lose, and that's the best time to go for it. As you start to get success — maybe it's money, it's fame — those things can actually hinder your liberties to just go out and really try new things."

On the status of the writing process for the next MEGADETH album:

David: "It's going well. It's funny, because we initially come home [from touring] and we kind of say, 'We've come home and we each go to our four corners of the ring.' We need a little time to debrief, get off the road. And we really hit it hard — the 'Dystopia' album cycle was two years long, and we went around the world a few times on that. And that's great. It's good to be able to sit back, kind of regroup. The way the process starts, we all start working on riffs, even completed songs. We work on lyric ideas. Of course, today, we can start sending things over the internet to each other. As we actually have a pretty full summer coming up of tour dates, I think on this tour, it will be as much as we're celebrating the 35 years of MEGADETH, looking back into the catalog for some different songs that we can add into the set list, but also starting to compare notes and really tighten up more of that writing process. After we finish up, that's when we're really going to be nose-to-the-grindstone as far as actually getting the tracks laid down and really grinding away on the actual recording of the album."

MEGADETH is celebrating its 35th anniversary throughout 2018 with special releases, exclusive merchandise items, and one-of-a-kind events and opportunities for fans worldwide.

Tentatively due next year, MEGADETH's upcoming follow-up to 2016's Grammy-winning "Dystopia" will mark the group's first release to feature drummer Dirk Verbeuren, who officially joined the band just under two years ago.