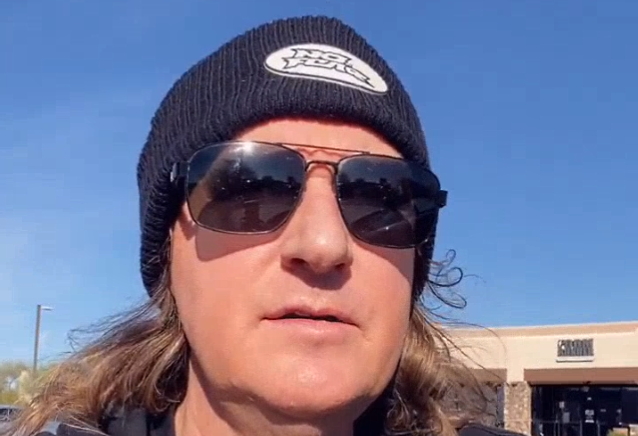 DAVID ELLEFSON Shares Life Advice: 'We're Meant To Learn From Our Past But We're Not Meant To Be Stuck In It'

David Ellefson, who was fired from MEGADETH last year following a sex video scandal, says that "we're meant to learn from our past but we're not meant to be stuck in it."

The former MEGADETH bassist, who turned 57 in November, touched upon his life philosophy while filming a new video message on Cameo, which lets users hire celebrities to record brief, personalized video messages about virtually any topic.

Asked to offer words of advice and motivation to a fan named Rafael who recently celebrated his 50th birthday and is about to retire, Dave said (as transcribed by BLABBERMOUTH.NET): "Look, what do I know? I'm just a dude living my life like you. But one day at a time, I guess, is the thing, right? And more will be revealed.

"What an awesome opportunity to reinvent yourself. I don't know if you're a man of faith, but check in with the Creator once in a while, if it be your desire. And lead me where you need me. I think that's kind of my deal; that's what I do."

Ellefson added: "I don't know if I'm any good at advice; maybe just more of my sharing my experience."

Davidcharges $30 for each of his Cameo videos for personal use and $100 for a video for business use.

Ellefson stepped away from Cameo for several months beginning last May, just days after sexually tinged messages and explicit video footage involving the bassist were posted on Twitter. At the time, Ellefson released a statement on Instagram denying all social media chatter that he "groomed" an underage fan. He also filed a report with the police department in Scottsdale, Arizona alleging unlawful distribution of sexually explicit images of him by unknown offenders. In the report, Ellefson admitted that he had been exchanging sexual text messages with a Dutch teenager, who captured a video of several of their virtual "masturbating encounters" without his consent and shared them with friends. (According to Ellefson, the woman was 19 at the time of their first virtual sexual encounter.) Within two weeks, he was fired.

Last October, Ellefson told SiriusXM's "Trunk Nation With Eddie Trunk" that there is a perception that people of faith must set a higher standard of how they live with and treat others. "It's almost like you're this entity that's floating up toward the heavens: 'Oh, he's such a wonderful man. He's a man of faith. He's got his family. And then this happens.' It's, like, 'What the hell is this?'" he said.

In July, MEGADETH leader Dave Mustaine addressed the possibility of Ellefson returning to the band while filming one of his own video messages on Cameo. Asked by Rock Feed if Ellefson could once again play with MEGADETH at some point down the line, Mustaine said: "Any chance on Ellefson coming back later on? The answer to that is no."