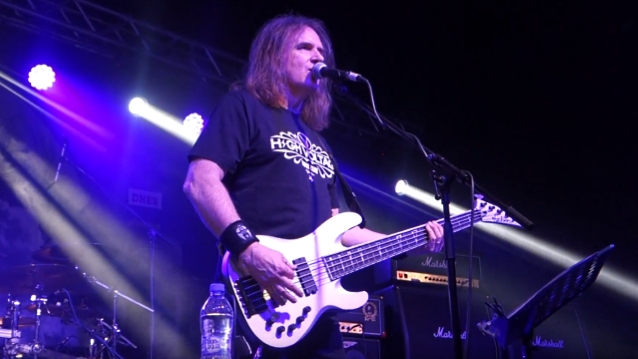 DAVID ELLEFSON: Why MEGADETH Opens Its Live Shows With 'Hangar 18'

During a December 5-6 Headbangers Con live virtual panel, MEGADETH bassist David Ellefson explained why he and his bandmates have been opening all of their live performances in recent years with "Hangar 18", a classic track from MEGADETH's 1990 album "Rust In Peace". He said (see video below): "For a long time, we used to open the show with 'Holy Wars', and then we started to move that back to an encore. In 2010, we were on tour in Europe with SLAYER — in '10 or '11 — and we were in Russia, Saint Petersburg; our first time there. And Dave [Mustaine, MEGADETH mainman] fell ill with a kidney stone. He was starting to have some stones, and it hit him — I don't know — an hour before we were gonna go on stage. We thought we were gonna have to cancel the show. And out of nowhere — Dave's a pretty tough dude, and all of a sudden, he just gets up and goes, 'Okay, we've gotta go do it. We've gotta at least play five songs.' And I went, 'Are you sure?' And he goes, 'Yeah. We've got to.' 'All right.' So I took the setlist, which I think at that time, one of the later songs in the set, we'd come out of 'À Tout Le Monde' into 'Trust' — we'd play 'Trust', 'Symphony [Of Destruction]', 'Peace Sells', 'Holy Wars'; it was some kind of thing. So I folded the setlist, and I said, 'Look, why don't we just start with 'Trust' and we'll just play these five songs?' So that's what we did. And it worked really well. It was kind of fun… So, for the next two years, we opened the set every night with 'Trust' — on a couple of Gigantours."

Ellefson continued: "Fast forward to 2013, we were on a Gigantour with BLACK LABEL SOCIETY, HELLYEAH. And Vinnie Paul [Abbott, HELLYEAH and PANTERA drummer], who's been a lifelong MEGADETH fan and a good friend to us, he comes on the bus one day and he goes, [adopts Southern drawl], 'Man, y'all's stage show is amazing, y'all's light show is incredible. Man, y'all gotta be opening with 'Hangar 18'.' We went, 'Really?' Me and Dave kind of looked at each other, and [Vinnie] goes, 'Yeah, man. I'm telling you, man. That's the one, 'Hangar 18', right there.' So, that night, we went on stage and opened with 'Hangar 18', and it was, like, 'Wow!' It really had an excitement about it. So, since then, even to this day, we open with 'Hangar 18', and now kind of almost in honor and memory of Vinnie [who died in 2018]. So we come out rocking, and it's a great song. It's nice, because the front-of-house soundman can sort of get our mix together, 'cause there's no vocals, so it kind of gives him a minute to mix the band. Of course, we do soundcheck, and stuff is digitally stored on the console these days anyway, but still, it kind of gives him a couple of minutes to get the mix of the band together before Dave starts singing the verse."

MEGADETH is currently recording the follow-up to 2016's "Dystopia" album for a tentative 2021 release.

In addition to Mustaine and Ellefson, MEGADETH's current lineup includes former SOILWORK drummer Dirk Verbeuren and Brazilian guitarist Kiko Loureiro, who was previously best known for his work with ANGRA.