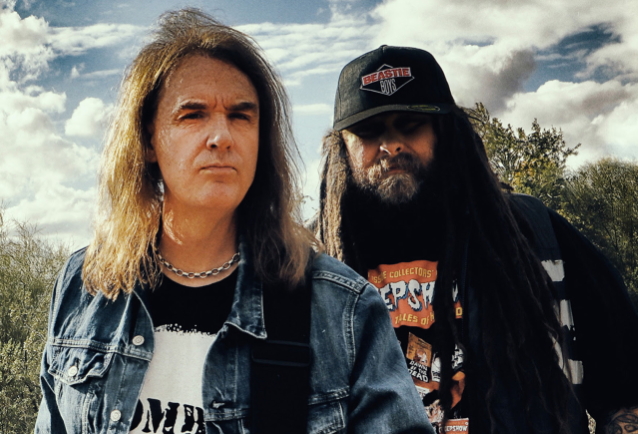 David Ellefson's longtime business partner Thom Hazaert says that he had nothing to do with the leak of the MEGADETH bassist's messages and videos featuring a woman who is not his wife.

Over the weekend, sexually tinged messages and explicit video footage involving the 56-year-old Ellefson were posted on Twitter. The longtime MEGADETH member later released a statement on Instagram denying all social media chatter that he "groomed" an underage fan.

On Tuesday (May 11),Hazaert took to his Instagram to share a photo of him with his middle finger extended, and he included the following message: "This one goes out to the chatty fuckers trying to whisper that I had something to do with what happened to David. David Ellefson is a grown fucking man and fully and solely responsible for his own decisions and judgment. But know... #ISeeYouMotherfucker".

Ellefson, who has lived in Scottsdale, Arizona since 1994, is also an author and entrepreneur, with Hazaert, holding the reins of EMP Label Group, Combat Records, Ellefson Coffee Co., and more, in addition to a diverse portfolio of brands and signature products. Ellefson was also inducted into the 2018 class of the Iowa Rock N' Roll Hall Of Fame, just over the border from Jackson in Spirit Lake, Iowa.