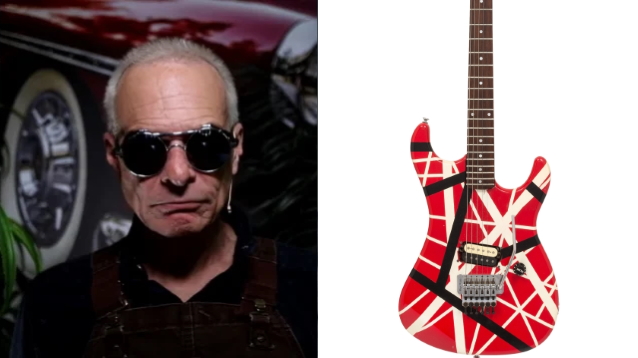 David Lee Roth has shared a seven-minute video in which he discusses how he was involved in the creation of the red-white-and-black-striped pattern Eddie Van Halen made famous on his "Frankenstein" guitar — and for which the legendary VAN HALEN guitarist has held the copyright since 2001.

Roth made the video in an apparent response to inquiries from fans over the VAN HALEN singer's recently released painting called "Big Wave" which many felt bore more than a passing resemblance to Eddie's iconic guitar.

"We've been getting a lot of cards and letters — digitally, so to speak — in regards to that there's similarities between my work and the stripes on Eddie's guitar, and that's because it's my work," David said in the beginning of the video, which can be seen below.

The Frankenstrat represented Van Halen's attempt to combine the sound of a classic Gibson guitar with the physical attributes of a Fender. It was originally made from an ash Stratocaster body, with pickup routing that Eddie altered to fit a Gibson PAF humbucking bridge pickup. It had a maple neck and fretboard, and chrome hardware. It developed through several early paint schemes ultimately into the now famous combination of red, with black and white stripes. It is a six-string guitar with an original Floyd Rose tremolo, which Eddie helped to develop.

In 2011, the Smithsonian's National Museum of American History acquired the VAN HALEN "Frank 2" guitar played and made famous by Eddie Van Halen through a partnership donation with Fender Musical Instruments.

The guitar was made in 2006 as part of a joint venture between the artist and Fender to produce a limited-edition number of guitars for the EVH brand. Known as the "Frankenstein Replica," or "Frank 2," it is part of the museum's Division of Culture and the Arts, which preserves a large and diverse collection of instruments.

Back in 2009, Eddie Van Halen filed a lawsuit against Nike in Los Angeles Friday, alleging the company used the trademarked striped design from his guitar on their line of "Dunk Lows" tennis shoes.

In a 2019 interview with Missouri radio station KSHE 95, Roth famously claimed that he wrote every song on VAN HALEN's debut album. When asked if he had to seek permission to play VAN HALEN songs with his solo band, he said: "No. I wrote the songs. I wrote every word you heard, every syllable, every melody. I structured out even the guitar solos on that first album."

Describing his creative role within VAN HALEN, he continued: "I wrote those songs, structured those songs. I designed the backgrounds on the stage. I came up with the album covers. I thought of the stripes on the guitar. I'm the one who said, 'Call it VAN HALEN.'"