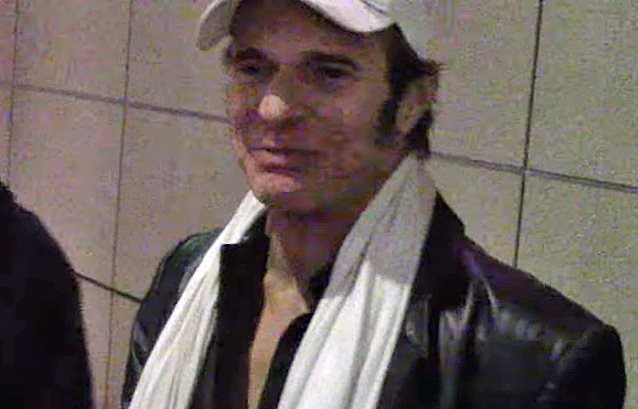 The reunion of VAN HALEN singer David Lee Roth and the band for his debut solo album, "Eat 'Em And Smile", was canceled at the last minute last night (Wednesday, November 25) by the fire marshal at the Lucky Strike Live in Hollywood. The show would have marked the first time in 30 years that Roth joined guitar hero Steve Vai, bass legend Billy Sheehan (THE WINERY DOGS, MR. BIG),drummer Greg Bissonette (RINGO STARR & HIS ALL-STARR BAND),and keyboardist Brett Tuggle to perform some of the hits from the classic LP. Also scheduled to join the band on stage was STEEL PANTHER vocalist Ralph Saenz (a.k.a. Michael Starr).

Video footage of a disappointed Roth leaving the venue after the cancelation can be seen below (courtesy of California Rock News). The singer, whose appearance last night was not officially announced prior to the gig, can be heard telling the bystanders: "I apologize about this evening. It looks like we were too popular." He added that he and his "Eat 'Em And Smile" bandmates would try to find another venue to stage the reunion. "Should we go to the Hollywood Palladium, maybe?" he can be heard asking the fans.

Sheehan later wrote on his Facebook page: "Well well well. The fire department shut down the whole show before we got on stage. And did we ever have a surprise for you! Such is life." He added: "Place was so crowded and the line continued down to Hollywood Blvd all night. Just too many people."

Vai explained to the Examiner.com that he didn't expect the band to come together when they first hooked up over thirty years ago. He said: "Dave got the best musicians he could, who he thought was the best. And I thought it was a hell of a band… It was one of my favorite times in my whole musical career, because we were rock stars, you know? And touring with somebody like Dave, you can't even imagine what it was like. It was just glorious, man. And I knew it was fleeting, and I knew it was something that I wasn't going to be doing my whole life, because my brand of music in my own head is very different."

Now in its 44th week, Ultimate Jam Night is a free weekly show held each Wednesday at Lucky Strike Live, located at the Hollywood/Highland center. Founded by Chuck Wright of QUIET RIOT, the show features up to 60 world-class musicians rotating in and out of various musical numbers.