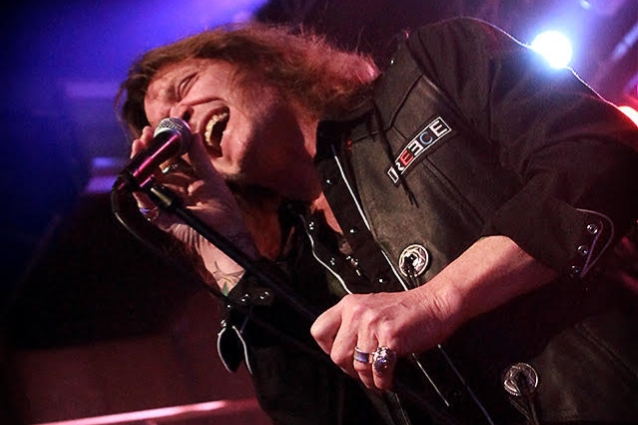 DAVID REECE On ACCEPT's Current Lineup: 'I Respect That They Continue' But 'I'm Not Really A Fan'

Former ACCEPT singer David Reece says that it's "very strange" to see the band carrying on with guitarist Wolf Hoffmann as the sole remaining member of the group's classic lineup.

Asked by Argentinian journalist Lucas Gordon what he thinks of ACCEPT's current lineup, which no longer features Baltes, Reece said: "I respect the history of the band. It's kind of the Wolf Hoffmann show, in my opinion. A lot of great people have left. I respect that they continue. I'm not really a fan. I admire them. But it's not like I look at AC/DC. ACCEPT is ACCEPT, but it's really just Wolf now. Very strange. But they carry on.

"I wish everybody success," he continued. "I mean, I have no right to criticize anybody, 'cause people criticize me. It's a small world, and everyone knows everyone. And I hope it works for them. It seems to be going well. They've had [singer] Mark [Tornillo] for four or five albums now, I think, [and they've done] big tours. And they have a new album [that was recently released], so I wish them luck."

This past January, Hoffmann called "Eat The Heat" "a dark time in our history of ACCEPT. I would say that all of the '90s were very difficult and very dark in a way, and I don't even like to think about it so much," he told Hardrock Haven. "If only you journalist guys didn't constantly ask me about it, I would never even think about it. [Laughs] 'Cause it was just a time when heavy metal was going through a very dark period. The traditional sound was out of style and nobody wanted to listen to it, so it was sort of searching for a new direction — especially in the '90s. 'Eat The Heat' came out at the beginning of that era and it was meant to be a new chapter, but it's just never panned out because basically everything went wrong with that album. And it's just something you go through in life. I don't see why I still have to defend myself in a way… People always ask me this question almost in a provocative way, as if I have to defend myself about this album. It's ridiculous… It's almost like people have to apologize that they like it."

He continued: "There's something about this album that rubs a lot of people the wrong way and they have such a strong opinion about it… It's sometimes laughable. In my mind, it had some fantastic songs but it was just never executed properly, and it was not meant to be. But over the years, I've met so many fans who said exactly the same thing, 'Man, I really wanna apologize, but I really like this album… I know nobody likes it, but I think it's great.' And I think that's so bizarre. If you like it, you like it. It's so strange that people are so opinionated about it.

"It's just music," Wolf explained. "You can like it or not, but it's not more than that. In any case, it wasn't the period of time that I like to even think about much, 'cause it was very difficult."