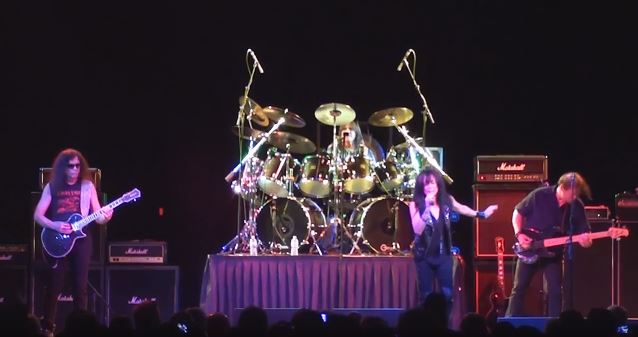 David T. Chastain and Leather Leone performed together live for the first time in over 25 years on October 8 at Bogart's in Cincinnati, Ohio. This special performance was part of the CJSS "Last Show On Planet Earth 2" concert.

Video footage of the concert can be seen below (video by James D. Gilmore).

Prior to the gig, Leather said: "To be on stage with David T. at Bogarts where it all began for me ... There are no words... just incredible anticipation. It will be like coming home. To share music with all of those fans again is of the utmost importance to me"

David added: "Last year was supposed to be CJSS's 'Last Show on Planet Earth' but the fans and Bogart's convinced us to do one more 'Last Show'. As far as I know, this will be the last CJSS show.

"Once the date was confirmed, I asked Leather to come and play a set as I wanted her to experience the Bogart's environment one more time.

"Leather will be singing all of the CHASTAIN 'hits' such as 'Ruler Of The Wasteland', 'Angel Of Mercy', 'For Those Who Dare' and 'The Voice Of The Cult', just to name a few. We will also play at least one of the newer songs off the recent CHASTAIN albums 'Surrender To No One' and 'We Bleed Metal'.

"Our last cross-country tour together was in support for the 'For Those Who Dare' album. That tour seems like centuries ago, but then again it feels like it was just last year. The passage of time is quite perplexing!"

CHASTAIN's latest album, "We Bleed Metal", was released last November. It is the follow-up to the band's 2013 reunion CD "Surrender To No One".

Leone has long been considered one of the originators of the female power metal vocal style. She was the vocalist on the classic CHASTAIN albums: "Mystery Of Illusion", "Ruler Of The Wasteland", "The 7th Of Never", "The Voice Of The Cult" and "For Those Who Dare". 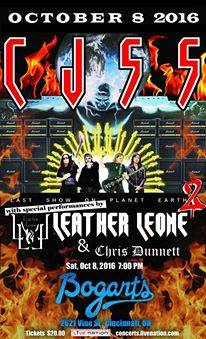