Veteran Dutch thrashers DEAD HEAD have posted another new song, "Firegate", on their MySpace page. The track comes off the group's new full-length CD, "Depression Tank", due on February 16, 2009 via Displeased Records. The CD was recorded at Hooiland Studios in Zwolle, Holland and was mixed and mastered by Robert Slump. The artwork (see below) was created by Wicliff Wolda, who previously worked with the group on the "Haatland" album.

Formed in 1989, DEAD HEAD recorded the "Haatland" (2005) album at Hansen studios in Ribe, Denmark with producer Jacob Hansen (RAUNCHY, INVOCATOR). A 10-inch vinyl EP, "Dog God", featuring two songs from "Haatland", the IRON MAIDEN cover "Total Eclipse" and a re-recording of an older track, was released in 2004 via Fadeless Records. 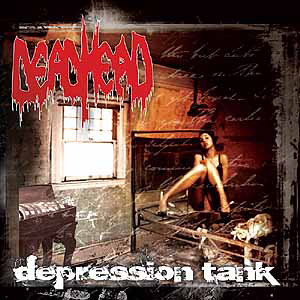